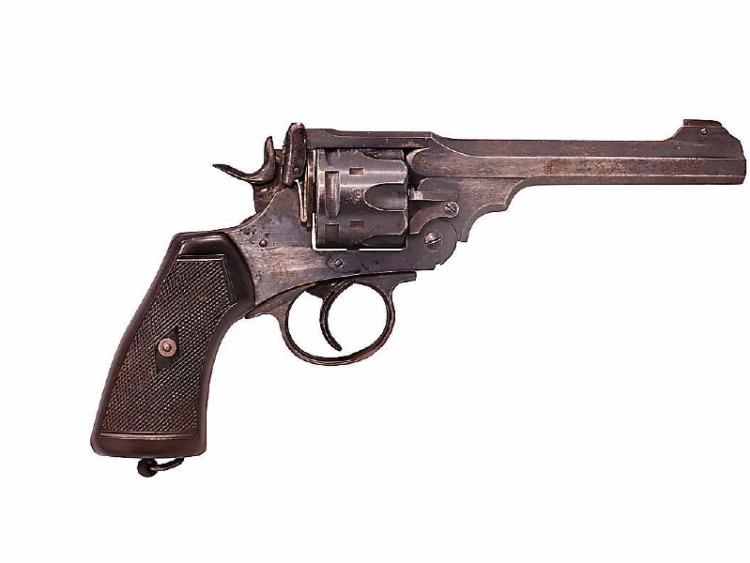 Webley .45 calibre revolver like the one used in the case.

A Kildare man features in a new book which is due out in the coming days and which outlines the deaths of Gardai in the early years of the State.

In terms of the book, ‘The Fallen: Gardai Killed in Service 1922-49’, Daniel Duff, from Askinraw in Suncroft is unusual for two reasons.

In the first instance, unlike the others mentioned in the book, he did not die. Secondly, he came to be in danger because he murdered another member of the force, rather than an external agent.

The book is written by Galway man Colm Wallace.

In November 1944, Garda Daniel Joseph Duff arrived at Pallasgreen Garda station in Co. Limerick directly from the Garda depot. He was the third eldest of seven sons. At school he was considered a brilliant student and after leaving Newbridge College he joined the Defence Forces for a year and a half where his conduct was described as excellent. On leaving the army, he enlisted in An Garda Síochána in June 1944. Pallasgreen, Co, Limerick was his first assignment.

In Pallasgreen he was one of two Gardai who were assigned to protect a landowner who was embroiled in a dispute.

The pair, the Suncroft man and Garda James Byrne from Co. Wicklow worked from 11pm-6am each night, with longer hours in the summer, and both were armed with a Webley .45 calibre revolver.

The pair spent nine months on duty, seven nights a week, and with limited sleep during the day. While they initially got on well, they began to quarrel over time.

On the 25th September, 1945, the pair of them turned up with a few pints on board and sharp words were exchanged leading to loud quarrelling and eventually, to extreme violence.

According to Garda Duff, Garda Byrne made a quick movement to his pocket. The Suncroft man believed he was going for his gun, and did likewise.

Garda Duff pulled out his own gun and fired two shots, hitting his colleague in the heart and killing him instantly.

In the hours and days that followed, Garda Duff was charged and tried with murder.

A three-day trial ended with the jury found him guilty and the judge donned the black cap and sentencing him to be executed on December 11.

Five days before he was due to be executed, the sentence would be commuted to one of penal servitude for life.

The author believes there may have been a “certain amount of sympathy for the talented young guard who seemed to have been under great strain at work.

“On top of this, there is little doubt that it would have been a national scandal to put to death a so-called guardian of the peace working for the government. Perhaps for this reason, Duff avoided becoming the only member of An Garda Síochána to be executed for murder.”

Garda Duff served a little over five years in prison and was released in November 1951.

“The Fallen: Gardaí Killed in Service 1922-1949” about twenty-one Gardaí killed in the line of duty in the Irish Free State is available in all good book shops and is on amazon.com