Next event is Friday at Ballymany cross 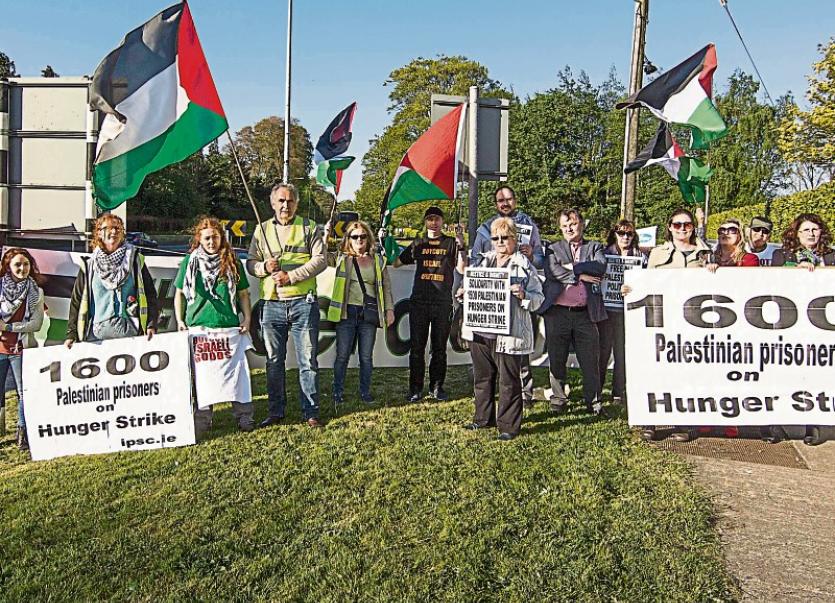 A solidarity vigil to support 1,600 Palestinian prisoners on hunger strike in Israeli jails was held last Thursday evening at the Wyeth roundabout in Newbridge.

Organised by activists from the Kildare branch of the Ireland-Palestine Solidarity Campaign, it will be repeated again this coming Friday, at 6.30 at Ballymany Cross in Newbridge.

The vigil held banners and posters in silence to draw attention to the hunger strike now entering its third week.

The prisoners began their hunger strike on April 17 under the title of “Freedom and Dignity” to call for an end to Israel’s practice of prisoner abuse, solitary confinement, torture, medical negligence and denial of rights guaranteed under international law—including the right to a fair trial and family visits.

Several Palestinian prisoners leading the hunger strike have been transferred into isolation and all striking prisoners are being denied lawyer and family visits.

Of the 56 females in detention, 13 are children.

A further 500 Palestinians are in administrative detention where they are being held for indefinite periods without charge or trial. It is estimated that since 1967 over 800,000 Palestinians or 40% of the male population will have served time in jail at some point due to Israel’s policy of mass arbitrary arrest and detention without trial.

Speaking at the vigil, Ms O’Neill said, “We are deeply alarmed that despite human rights abuses, jailing of children, continuing occupation and theft of Palestinian land, our government along with the European Union has failed to hold Israel accountable for its grave violations of international law.”

And she called on the people of Kildare to stand in solidarity with the Palestinian prisoners by urging their elected representatives to put pressure on Israel to stop its ill-treatment of prisoners. She said the most powerful and effective form of solidarity for Irish people is to heed the call of Palestinian civil society to boycott Israeli goods and she highlighted produce currently stocked by local supermarkets such as potatoes, peppers, avocadoes and some herbs.