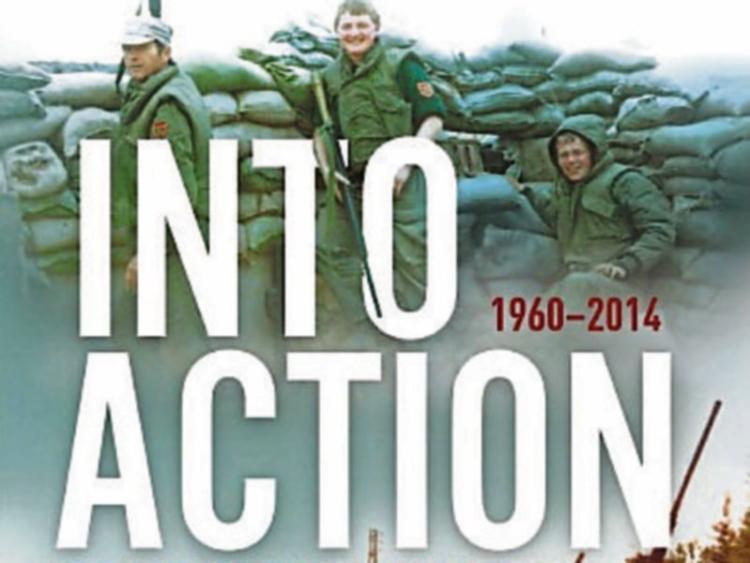 Copy of the new book.

A new book will be launched on Thursday night (April 20) at Newbridge Silverware that aims to gather a collection of all the incidents that saw Irish peacekeeping forces come under fire.

INTO ACTION - Irish Peacekeepers Under Fire, 1960–2014 by Dan Harvey, presents what the publisher believes is the “far less familiar ‘hard edge’ of Irish Peacekeeping, bringing readers into a world of conflict, fears to be faced, conflicts to contain, and engagements that must be won”.

The recent cinema and Netflix release of ‘The Siege of Jadotville’ brought into focus once again the difficult and dangerous role of the Irish Army in their work as UN peacekeepers.

“While their actions in the Congo are perhaps most widely known and reported, the Irish Defence Forces have come under fire in Lebanon, Kosovo, Chad, and most recently Syria.”

And now, for the first time, former Lieutenant Colonel Dan Harvey has gathered together the fascinating details of these dramatic events, across some of the most protracted and complex international conflicts.

“The professionalism, courage and determination of the Irish personnel throughout is the constant unifying strand running through six decades of keeping the peace where others could not,” say publishers Merrion Press.

Dan Harvey served on operations at home and abroad for 35 years to date. He is the author of Soldiers of the ‘Short Grass: A History of the Curragh Camp’ and has previously written about major incidents involving Irish Defence Forces members on active overseas peacekeeping services, including ‘Peace Enforcers: The EU Intervention in Chad’ and ‘Peacekeepers: Irish Soldiers in the Lebanon’.