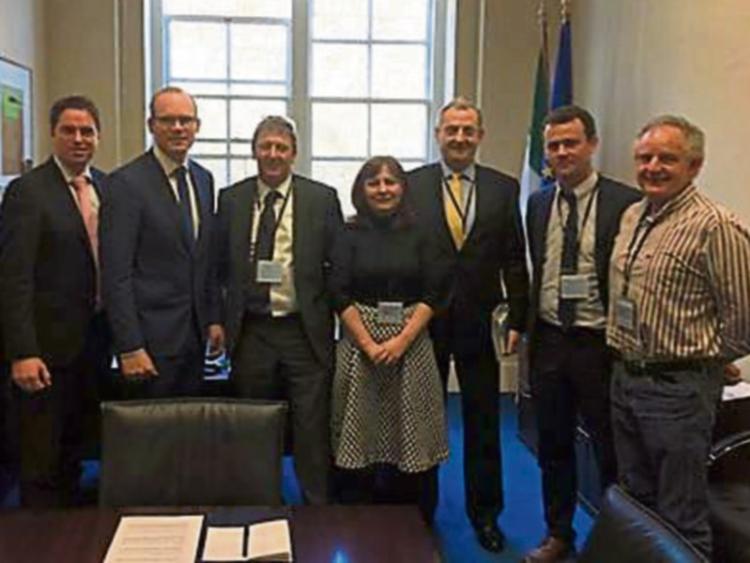 A group of business people representing Kildare rate payers met Minister Coveney yesterday to highlight their anger at the huge rate hikes enforced on them.

“He took notes and we explained everything. We asked him if he could change the law so that the rates could be based on the profits people made,” said delegation member, Simon Cross.

However, Mr Cross said the Minister said that wouldn't work because if there was a slump in the economy, then the rates income would plummet.

The Rathangan business man did say the Minister was not aware of the fact that online businesses were not subject to rates. He was also made aware of other entities, which were allowed to operate without paying rates.

Mr Cross said businesses just wanted the rate to be calculated fairly across the county.

His rates have increased by 780% and he said he knows of another business in Rathangan that received an even higher rate hike.

“My place was calculated at a rentable value of €81,000, but Pitts garage was recently sold in the town (Rathangan) for €90,000. It doesn't make sense,” said the owner of Cross Agricultural Engineering, which employs 42 people.

Rathangan has been hit hard by the recession with many empty premises in the town centre.

Mr Cross said he was aware of a premises, which was offered for an initial six month rent free period in the town, but had no takers.

Horse trainers have also been hit with huge demands and are asking the Minister to allow them to be placed back into the farming sector rather than their current categorisation in the leisure sector.

The rate evaluation was carried out by the Rates Valuation Office and is based on a number of factors including rents, square footage and other issues depending on the type of business.

That rateable valuation is then multiplied by .24% – the AVR (Annual Rate on Valuation) rate set out by Kildare County Council.

When the calculations were sent out last month, many businesses were up in arms, while others received cuts.

However, it appears that those who have seen increases, have had huge jumps. So far seven public meetings have been organised across the county.

Mr Cross points out that pressure needs to be put on councillors to lower the AVR rate for businesses in Kildare, which in some parts of Dublin.

He organised a rates meeting in Rathangan Community Centre last Tuesday night April 11. A total of 25 businesses were represented.

His son Jason Cross has also set up an online petition for businesses to register their disapproval at the rate hikes. So far, over 400 businesses have signed up.

“Times are changing. You don’t need to have a shop front now. You could set up a online business in your attic and you wouldn't have to pay rates,” he said.

Mr Cross points out that businesses who are concerned about their rate valuation have to lodge an appeal before April 18. If they are still unhappy with the decision after that, they can go to arbitration, which will cost between €200 and €500.

Sporting clubs or community halls who have bars, run functions, or a shop, have also been charged rates.

He points out the online appeals process is easy to do but, he urged businesses to accompany their appeal with a letter outlining all the details about their enterprise as the valuations office may not have enough information.