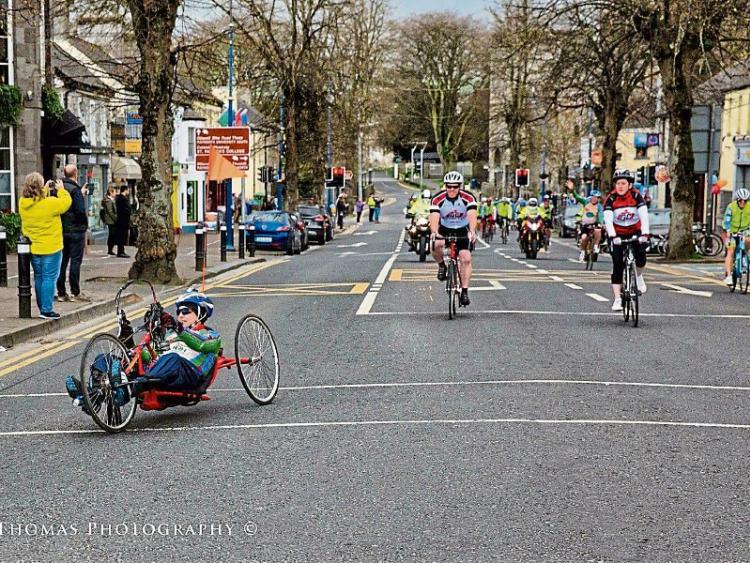 Almost a year after a serious cycling accident changed this life Maynooth man Mark Nugent made a triumphant return to cycling by leading the 2017 Galway Cycle home from Kilcock last Sunday evening.

On April 18, 2016 Mr Nugent sustained a spinal injury in a cycling accident and is now a wheelchair user.

His story and his positivity has inspired thousands of people since then and this year’s Galway Cycle, a fundraising event run by students in Maynooth University, raised €70,000 for the National Rehabilitation Hospital (NRH) in Dún Laoghaire where he spent several months after his accident.

This was the 30th anniversary of the cycle, which has raised over €1.6 million for children’s charities over the past three decades.

Mr Nugent has taken up handcycling in the last six months or so and joined the almost 200 strong group of cyclists for the final kilometres into Maynooth from Kilcock.

It was an emotional moment for him and his family and friends as he lead the huge convoy into the Square in the centre of Maynooth.

He was accompanied by his brother Alan, fiancee Jacqueline, future sister-in-law Ruth, his father Dominic and close friend Conor Dempsey.

“I didn’t really feel a part of it on Friday (when the cyclists make their way to Galway from Maynooth) so it was important for me to do something. It was really important,” he told the Leinster Leader.

“So many other people came together to do this for the charity, and after my time at the front on the way home, I can say it was one of the best Galway Cycles that I’ve done, even though it wasn’t the longest one for me.

“When the cyclists arrived into Kilcock, there was a great buzz, a great feeling.”

But there was an extra dimension to his short but important cycle on Sunday evening. “I had never cycled by the accident point before. I wanted to get by it on my own. I felt it was something I needed to do,” he explained, which is why he cycled ahead of the main bunch for the first little while.

“It was a big thing for me, especially being so close to the (anniversary) date and everything.”

The 2017 Galway Cycle was in aid of the National Rehabilitation Hospital (NRH), Dún Laoghaire, with a particular focus on the Paediatric Family Centred Rehabilitation Unit.

The charity was picked by the students to be the 2017 recipient after it was nominated by Mr Nugent, who has completed the Galway Cycle a number of times in the past.

He accompanied the cycle on Friday in his car, driving to the various pit-stop points to meet the cyclists.

“You don’t see it when you’re cycling it, but there’s a great buzz behind the scenes, and I got to see that when I was waiting for them in Loughrea.

“From everybody getting the food ready and then afterwards during the clean up, it was just unbelievable to see all that.”

Mark’s fiancee Jacqueline Healy was a cycling marshal on this year’s event, giving him a further insight into the great work that is done behind the scenes.

“When you’re a cyclist, you just have to cycle. You really don’t appreciate what goes on behind the scenes,” he said.

Next year Mark aims to complete at least two stages of the cycle in both directions.

“That’s my goal - I’m up to 20kph comfortably, maybe even a little bit more.” He is conscious that the Galway Cycle travels at approximately 25kph.

This year’s edition of the Galway Cycle has already raised €70,000 for the NRH.

It was also the fastest edition of the event in recent memory, with the cyclists making the return leg home from Galway to Maynooth on Sunday in just seven hours - at least an hour and a half quicker than normal.

Almost 190 cyclists took to the road early last Friday morning for the first leg down to Galway, arriving into Eyre Square just before 6pm.

After spending Saturday collecting funds for the charity on the streets in Galway, they got back on their bikes just after daybreak on Sunday morning.

A mild tailwind allowed the convoy of cyclists to make good progress across the course of the day, recording an average speed of 27.4kph, almost 3kph faster than normal.

"The Galway Cycle is an amazing experience one which wouldn't be what is is without all these people. You can't fully understand it until you experience it yourself. "

Donations are still being accepted. Click here to donate or to learn more about the event.