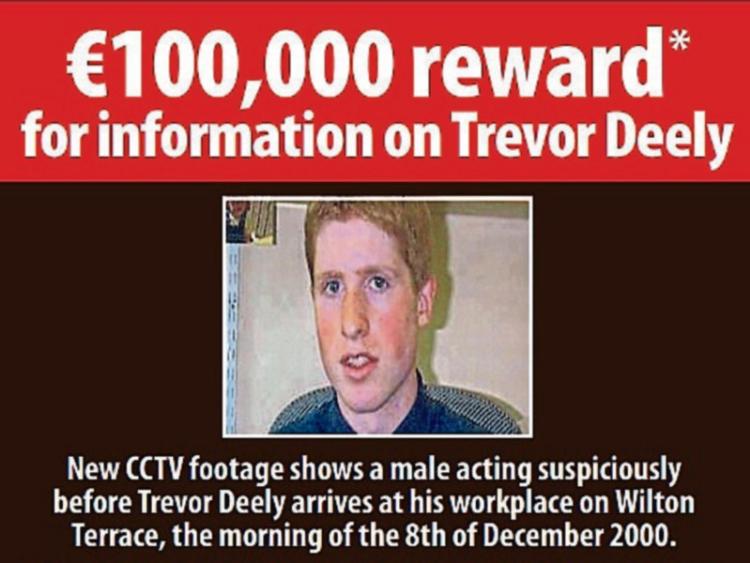 A reward is being offered for information on Trevor Deely's disappearance

A €100,000 reward is to be offered for information which solves the disappearance of Naas man Trevor Deely.

Trevor disappeared in Dublin in the early hours of December 8, 2000, after a work office party.

At a joint Crimestoppers/Garda renewed appeal in Harcourt Street this morning, it was confirmed that a €100,000 sum would be offered as a reward for information that helps solve the case.

Gardai would not confirm the source of the reward money, but indicated it came from a private donor, and was not State or Crimestopper funds.

Meanwhile, new video footage has been released which shows a man acting suspiciously in the vicinity of Trevor Deely’s workplace the night he disappeared.

The CCTV footage captures a male dressed in black acting suspiciously outside the rear entrance of Bank of Ireland, Asset Management Offices on Wilton Terrace, Dublin 2 between 3am and 3.34am, prior to Trevor Deely arriving. Trevor called into work for a short period after his office party.

At 03.34am, moments before Trevor approaches his place of work this male steps out onto the footpath and follows Trevor Deely to the back gate of Bank of Ireland, Asset Management before conversing with him at 3.35am.

Trevor was last captured on CCTV passing the Bank of Ireland ATM machine on Haddington Road at approximately 4.14.21am on December 8. Gardaí believe that the male acting suspiciously outside of Trevor’s place of work is the same male that is seen passing the Bank of Ireland ATM on Haddington Road at 4.14.55am, 34 seconds after Trevor Deely that morning.

That man has never come forward, and gardai are appealing for him, or anyone who has information on the case, to contact them.

WATCH: The new CCTV footage below

WATCH BELOW: Donor who put up €100,000 award money for Trevor Deely information wishes to remain anonymous