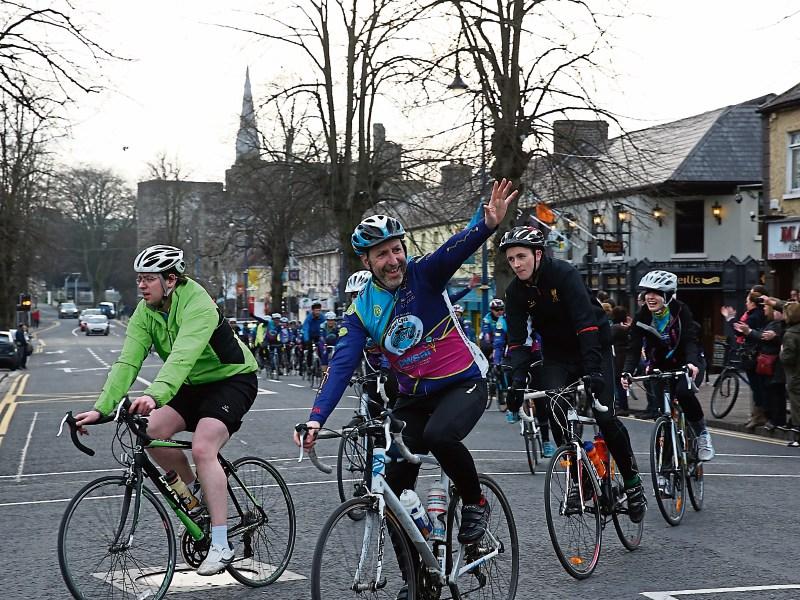 The Galway Cycle participants heading back into Maynooth

A major new study, funded by a charity with significant Kildare links, into the needs of people with a rare genetic disorder was launched last week.

The report was published by the Prader Willi Syndrome Association of Ireland — which has strong Kildare links — and is based on the first national survey to look at the needs of people with PWS and their families.

PWS is a complex multisystem genetic disorder, and is characterised by developmental abnormalities leading to symptoms such as infantile hypotonia and failure to thrive followed by life-long hyperphagia, developmental delays and moderate- to-severe behavioural problems and several physical problems that impact health.

The chairman of the PWSAI, Anthony Carr — who lives in Naas — says that the report “ is an asset for all families with PWS members, as it documents in a scientific way what it is to have PWS and the impact that has on the family.

“It also highlights the uniqueness of the condition and points to the need for PWS specific services to provide appropriate care for the person with PWS.”

In another Kildare link, the report was funded by money raised by Maynooth Students For Charity Galway Cycle event in 2014.

This enabled PWSAI, a modest organisation compared to many charities to fund such an expensive piece of research. Around 100 people are currently living with PWS in Ireland.

Most have a mild intellectual disability, while 22% of teenagers and 60% of adults have a specific mental health problem. Almost all affected babies need to be admitted to ICU, for an average of 26 days.

Almost half of affected adults need help with everyday tasks.

None of the survey participants were living independently and yet just 6% of those caring for children with PWS have access to respite car.

The report is the result of collaboration between the (PWSAI) and Trinity College.