Bugs, trees and a cupla focal 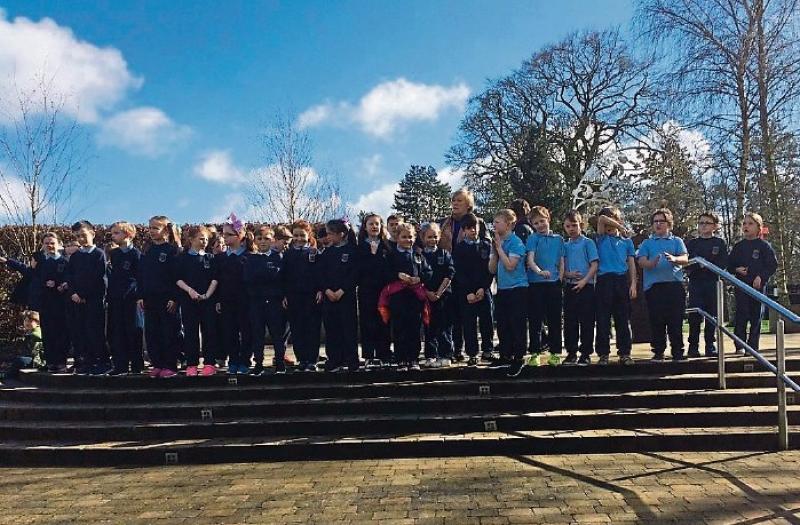 Pupils from three different primary schools in Kildare town got a chance to plant their own trees as part of Tree Week at the National Stud on Wednesday.

Pupils from Educate Together, Gaelscoil Mhic Aodha and St Brigids were taken on a tour of St Fiarchra's garden by broadcaster Eanna Ni Lamhna.

They also got a chance to see the buglington hotel which is a new creature feature at the stud.

“They learn all about the different trees and what they are used for,” said Eanna.

“There are seven or eight different trees as we around including the oak tree, the pine tree and the yew tree. The bark of the yew was used to make bows for arrows while the silver birch was used for paper.”

On the way around the children had to make sure not to wake the fairies, who were sleeping off a party from the night before.

The last stop on the way round was the buglington hotel which is home to lots of creatures including lady birds, ear worms, milipeeds, centipeeds, beatles and bumble bees.

After a look at the hotel the children were then taken back to plant their own oak trees which they were allowed bring back to either plant at home or at the school.

Here's little video of the pupils from the Gaelscoil planting their trees:

National tree week also coinicides with Seachtain na Gaelige so the tours were given by Eanna in both English and Irish.

National Tree Week runs from March 5 to March 12 and encourages everybody to get involved, plant a tree and be a force for nature.