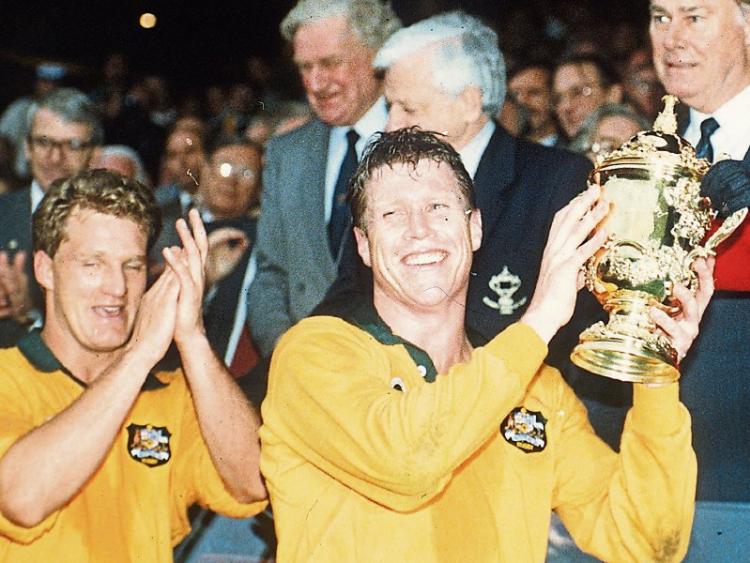 Nick Farr Jones collects the Webb Eliis Cup in 1991, a few days earlier Australia had trained in Forenaughts ahead of their semi-final against the All Blacks

I’d heard of Nick Farr-Jones but I never expected him to walk through the front gates of Naas Rugby Club in 1991.

It was an autumn weekday and he was with Phil Kearns who was also on the Australian rugby team and Eddie Farrell who wasn’t.

Eddie was Naas but he’d been hired as a masseuse by the Australians who were playing the All Blacks in the Rugby World Cup semi-final in Dublin that weekend.

Everyone was taken aback.

Farr-Jones was Australia’s captain and here he was hanging with Eddie and running through a few moves with the Naas U-14s.

People raced to the clubhouse and searched for paper and pens to try and nick an autograph.

Someone tore the cover off a car logbook.

Then out of nowhere Marty Roebuck, the Australian full-back, wandered over.

Our jaws were already in the muck.

A couple of days later the same players rolled up their sleeves to beat New Zealand and a week later Farr-Jones and Kearns climbed into the stands in Twickenham to hoist the World Cup.

Defeated finalists England were in mourning but in Kildare there was a feeling of somehow being connected to the success through Farr-Jones.

It was no one-off. In 2005 Leinster played a pre-season friendly against Parma from Italy, in Forenaughts.

Bizarre as that fixture sounds, it was an occasion made bigger because Leinster had just appointed  a new coach from Sydney — Michael Cheika.

All the big rugby writers were down from Dublin and Newstalk filed their report from the roof of a Portacabin that doubled as a Press Office.

It didn’t feel like the start of something but, before Cheika left, Leinster returned the European Cup.

The links of success to this leafy pitstop out the back of the town continued when the Argentinian team pulled into Naas in the mid-2000s. They weren’t seen as real contenders but they’d finish third at the World Cup in France in 2007.

I raced out to watch Felipe Contepomi and Juan Hernadez run a few moves on the front pitch only to get waylaid by a couple of tonnes of best South American beef sizzling over burning embers in the club car park.

We were so distracted by the steaks we almost missed the Argentinian team leaving. Only the coach couldn’t get out the gate. The driver honked his horn over and over again. Someone had parked too close to the exit.

Was I shocked to see it was my van!

So when I did catch sight of Contepomi I was traffic-light-red and he was scowling out the window of the bus.

Naas has been a staging post for Irish successes too down the decades and the international rugby team has trained in Forenaughts many times.

I remember Paul O’Connell, with hair, doing a series of shuttle runs up and down the first pitch at the start of his Ireland career. And Brian O’Driscoll ambling across the pitch wearing a pair of shades on the day of Cheika’s Kildare debut.

Jamie Heaslip was playing that Leinster v Parma afternoon too. Geordan Murphy played on so many afternoons before that and Phil Lawlor from Kill, capped for Ireland in the years before that again, did some service in the club's jersey also.

One year the entire Irish team ditched the training pitch and turned up in Naas main street.

It was a bit like the famed Farr-Jones/Australia visit in that it was early in the week and no one expected it. Only the drama played out under the lights down the back of Kavanagh’s pub not the dimly lit bulbs illuminating the back pitch in Naas RFC.

I don’t know where that particular night finished.

But the guts of that team did return a Grand Slam.

Robert Mulhern is a London-based journalist contracted to RTE's Doc On One. To contact our columnist, email mulhernrobert@hotmail.com.

The triumphs and disasters of Naas fashion in the 80s

What happened to Shergar?