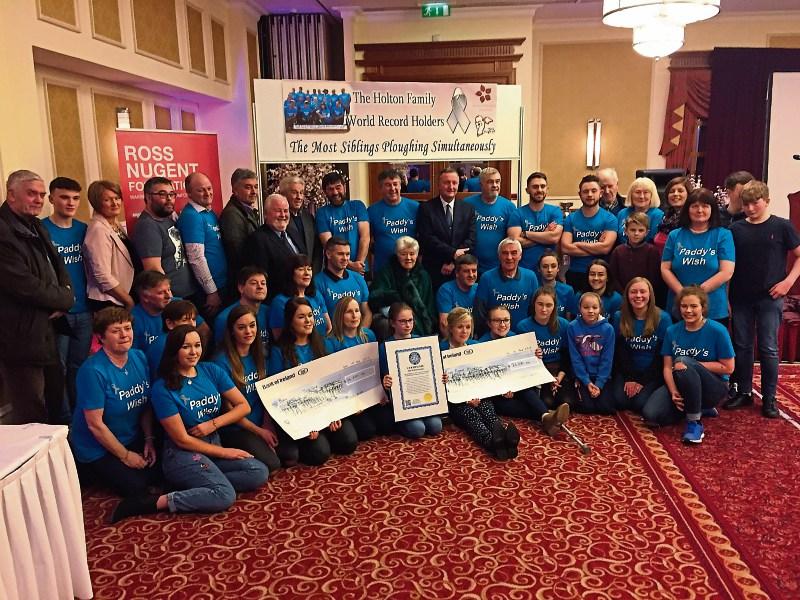 The entire Holton family at the Hamlet Court Hotel in Johnstownbridge last night.

The Holton family presented cheques worth €26,300 to two charities in Johnstownbridge last night.

The money was raised by the North West Kildare family when they got into the Guinness Book of Records last October for having the most siblings ploughing simultaneously.

The event was an idea of - and in memory of - Paddy Holton, a member of the family who was diagnosed with primary brain cancer in January 2015 and died 10 months later.

From the Holton family’s experience, brain cancer research has had very little advancement over the past 30 years. Paddy’s father Willie died back in 1988 from the same cancer glioblastoma, aged 61, and from diagnosis to his death he only survived 10 months. Paddy was also 61 when he passed away and only survived the same length of time.

A total of 15 Holton siblings took part in the ploughing event at Kilglass, Broadford on October 2 last.

Speaking at the cheque presentation, another of the siblings Frank explained that as per Paddy’s wish, the money would go to Brain Tumour Ireland and the Ross Nugent Foundation.

“Paddy would have been so so proud of everyone that day,” Frank said, referring to the day of the record last October 2.

“Everyone could sense the sense of achievement.”

Paddy’s wife Bernie explained how Frank had approached shortly after her husband’s passing.

“I wasn't in great shape at the time,” she admitted, but added that work began soon after that to organise the event.

And she relayed how Paddy came to be aware of the work of the two charities during his time in treatment in Beaumont Hospital.

Frank spoke of the support and help of the Shamrock Car & Machinery Club who helped to organise the event, and he thanked them for that.

“The whole thing might have stalled without their help,” he admitted.

“This was typical of what we found - we went to people for something and we came away with a lot more.

“A whole community that pushed us along.”

Ned Dunne chairman of the Shamrock Club said they were “absolutely delighted to be involved in it.”

And he predicted, it would be a long time before the record is broken again!

Dawn Holton spoke of how the success of the event completely blew all their expectations.

“We were thrilled with generosity of the community and local businesses.”

She said that when they opened an account in the local credit union, they joked that it would be nice to make €20,000 from the event, so they were very surprised when the total turned out to be  €62,000. 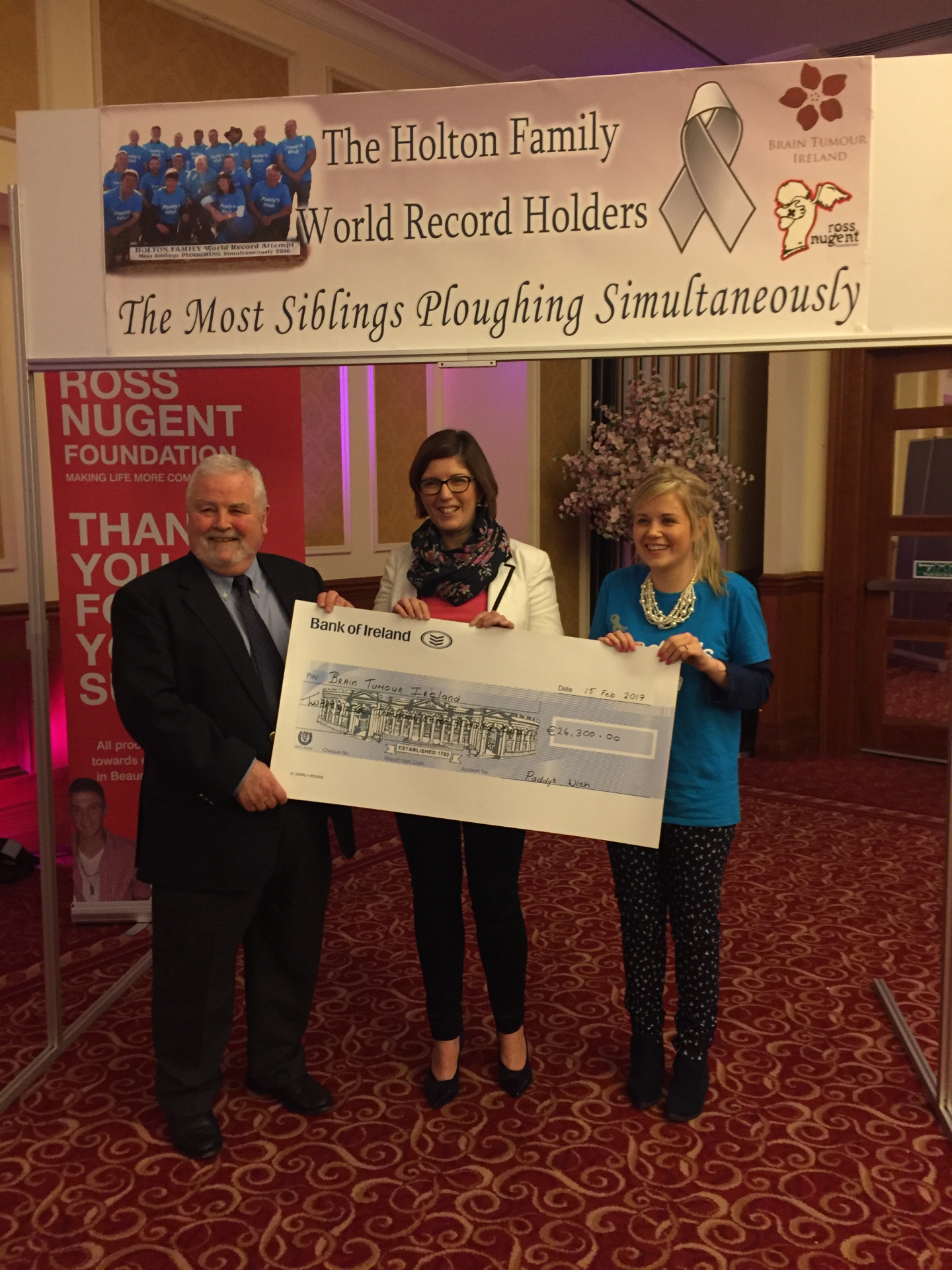 Jimmy Doyle of Brain Tumour Ireland admitted that as a city boy who thinks that “milk comes from cartons” I was blown away by the event.

He said that all of the money would go into research being carried out in Beaumont.

“Most importantly tonight, let's remember Paddy whose idea it was and who during his illness was thinking of others.” 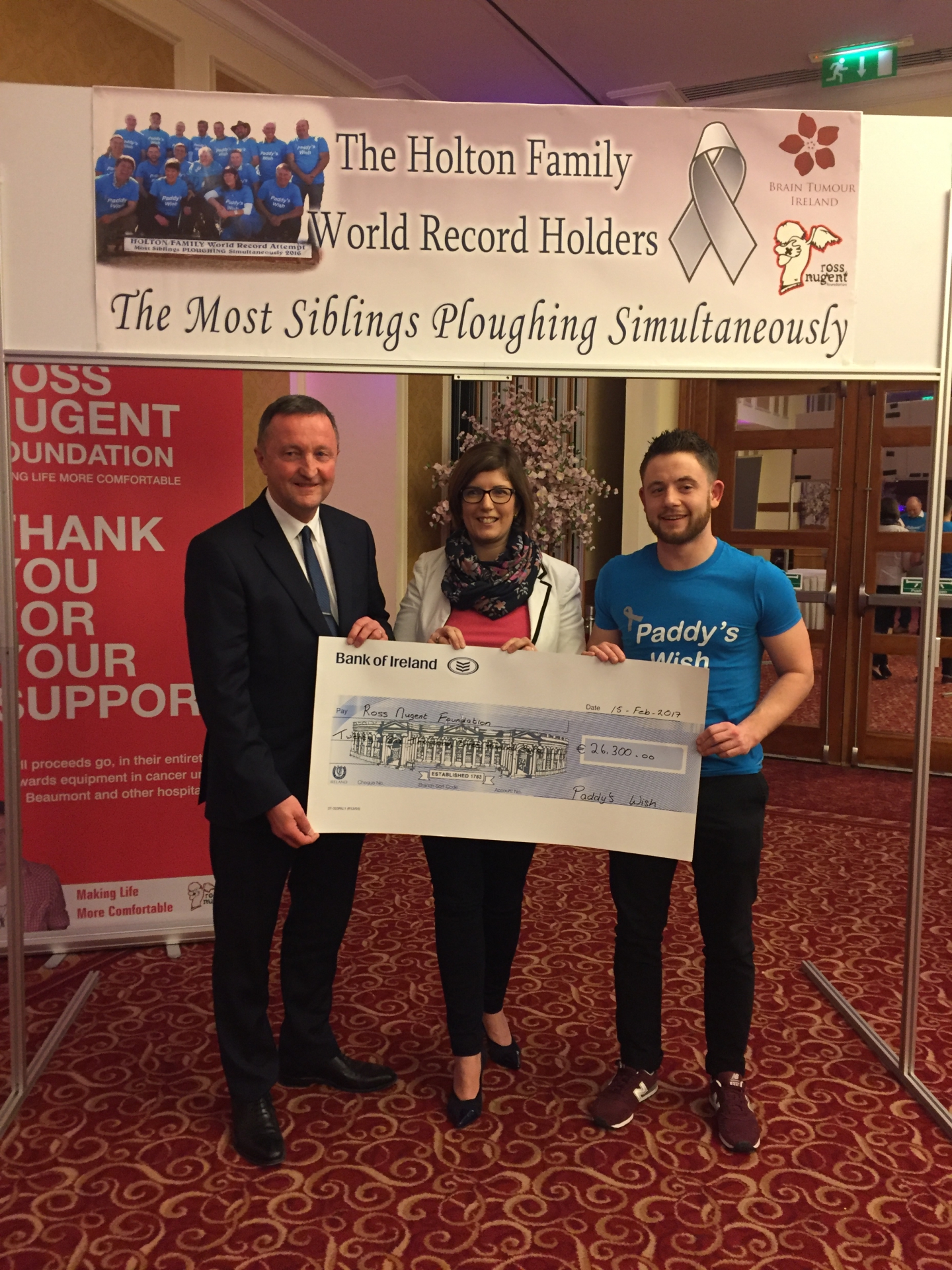 Don Nugent, of the Ross Nugent Foundation explained how his son had been diagnosed with Ewings Sarcoma and had noticed, while receiving treatment, that Beaumont Hospital was lacking in some equipment.

“At the time of his treatment, we'd sleep on the floor in the hospita. We didn't mind, but it broke his heart,” Don said of his late son.

As of last Wednesday night, the charity has €80,000 of equipment on order.

They have been asked to fit-out a room in the oncology ward and money from the ploughing day will go towards that.

Don thanked the Holton family for making he and his wife Sandra “so welcome” on the day that they were thinking of moving to the area!

It was a sad day in many ways, he noted, but it felt so positive, he said.