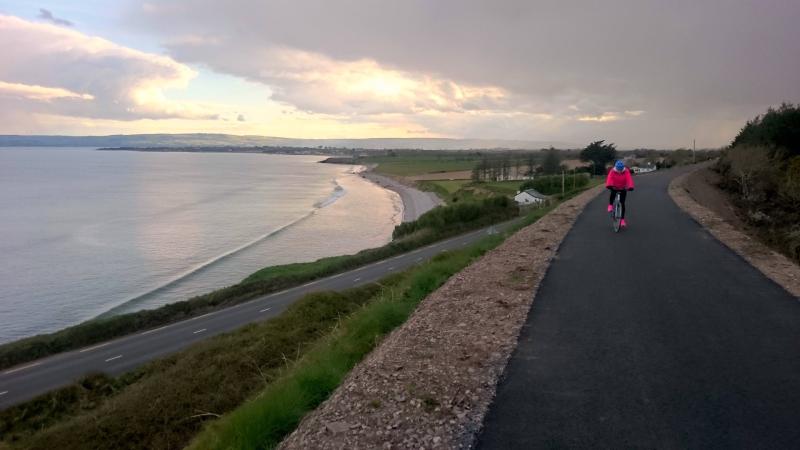 The Deise Greenway is set to be a huge boost to the south east. The development of one along the Grand Canal could do likewise for Kildare.

It was a figure I couldn't quite believe. I even asked a couple of friends over the weekend to see if it sounded believable or not. And it didn't, but there you go - and it’s tremendous.

What would you reckon is the value, on an annual basis, from cycling tourism, to the Irish economy?

Well, that’s not an entirely inaccurate statement - but there's also the various companies that organise tours, as well as the local Irish people who are increasingly heading off on their own bikes for a few days away.

But overall you're probably thinking it's not a huge amount.

Let us assume that given the success of the Wild Atlantic Way, the Greenway and the development of other greenways around the country that it has probably gone over the €100 million mark since then.

It's clear that there's way more money in this than we imagined.

Let me explain how I came to be looking at all this — because there's even more good news there.

I was writing a piece about the jaunt myself, the editor and Ross from Bikeology did last Tuesday from Heuston Station to Sallins.

I won't go over that whole thing again - you can watch/read all about it here.

But in the course of my research for that piece I came across a paper entitled 'Measuring the success of the Great Western Greenway in Ireland' authored by Gerard Deenihan, Brian Caulfield and Dermot O’Dwyer, all of the Department of Civil, Structural and Environmental Engineering in Trinity College.

It’s worth Googling. It’s short enough, but heavy going in parts, and that's probably a good thing - it’s appropriately academic to lend weight to the arguments for increased investment in similar-type infrastructure.

Describing itself as an economic analysis of tourists cycling along the Greenway it sought to determine the quantity of tourists needed to recoup the investment cost of building the Great Western Greenway (GWG) which runs the 42kms from Westport to Achill.

And it also sought to determine if that Greenway, and further greenways would be a worthwhile investment.

The report concluded that the cost of the GWG was approximately €5.7 million.

To their great surprise, given how sparsely populated the general area is, by examining the usage along the route they discovered that peak usage was at times that corresponded to children going to and from school, except during the summer period.

This shows that rather than being something that was built ‘for the tourists’ it’s actually also being used for daily domestic commuting.

The average usage in general on the Greenway, taken across the entire year, was 300 per day. Naturally, they found that the state of the weather had an affect.

“The Greenway is located in a predominantly rural area and was expected to be mostly used by tourists. From analysis of the usage counters along the Greenway, it can be seen that there are pronounced morning peaks and afternoon/evening Monday to Friday,” they note.

“This indicates that not only are tourists using this facility, but it is being used as a sustainable travel mode for locals.”

The document quoted a study of Switzerland’s national cycle network over a three-year period. It's a good one to consider because like ourselves, Switzerland is a reasonably small country.

The survey gathered information at 16 random locations around the network and concluded that there are about 7.2 million day trips on the network and 350,000 overnight trips annually.

In 1999, Sustrans (a UK group that lobbies for more sustainable transport) published a report which found that cycle tourism was worth £695 million to the UK economy annually. You can imagine what it's worth now, 17 years later.

Their final word on the matter is as follows: “These figures indicate that investing in cycling facilities in areas that cater not just for local usage, but also for tourists can be very worthwhile to the local economy.

“The small local population of the area alone would not warrant an investment of €5.5 million in cycling facilities.

“However, the amount of tourists using the Greenway has made the facility a very worthwhile investment.”

Now, taking that into consideration, it seems abundantly clear that creating a similar cycling path from Dublin down to Sallins and onwards along the canal, is a no-brainer.

As we discovered last week, only 10kms of the 30kms from Inchicore to Sallins is not a usable cycling lane, which means it would cost considerably less than the €5.7 million it cost to do the 42kms of the GWG.

Secondly, unlike in Mayo where there is a small population, there is an enormous population around this area which would suggest that it would be well used - so much so that an average usage of 300 per day would be very conservative.

Thirdly, from a tourism point of view, the canal in Dublin is far easier to access for tourists than either end of the GWG in Mayo.

Therefore it stands to reason that it would prove to be more popular again.

Now imagine if we had, on average, 500 tourists spending, as the report suggested, approximately €50 each per day and making their first pit-stop in one of the cafes in Sallins or Robertstown, what a fantastic revenue stream that would generate for the area - €25,000 a day!

Or what if they decided to stay in Kildare on their first night? Or visit a local bikeshop? Or even visit nearby local attractions?

The affect would be tremendous. It would cost far less than €5.7 million, would attract far more than 300 people per day and would pay for itself long before six years.

This not a new idea. Cycling tourism has been around since the early 1900s.

And the Grand Canal Company, when it began to build the canal in the mid 1700s knew it - that’s why they built the hotel in Robertstown - because they knew that not only could they make a few bob charging people to travel by barge, but they could also make a few bob feeding them and putting them up for the night.

I propose that a new Grand Canal Company be formed, as a subsidiary of Waterways Ireland perhaps, to bring new life and a new role to the Grand Canal.

We may not have long to wait to prove all this. Work is continuing apace on the Royal Canal, with pathways being created through Maynooth, Kilcock and onwards. We’ll see shortly where this all goes.

This article appeared in our edition dated February 7. In this week's edition (February 14) we report that Waterways Ireland has submitted a planning application for a Blueway that runs from Lowtown in Robertstown and on down the Barrowline into Laois and beyond.  This is tremendous news for larges sections of Kildare, most notably the villages of Robertstown and Rathangan. My only hope is that a bit of joined up thinking will apply and canal bank back to Dublin will also be done.