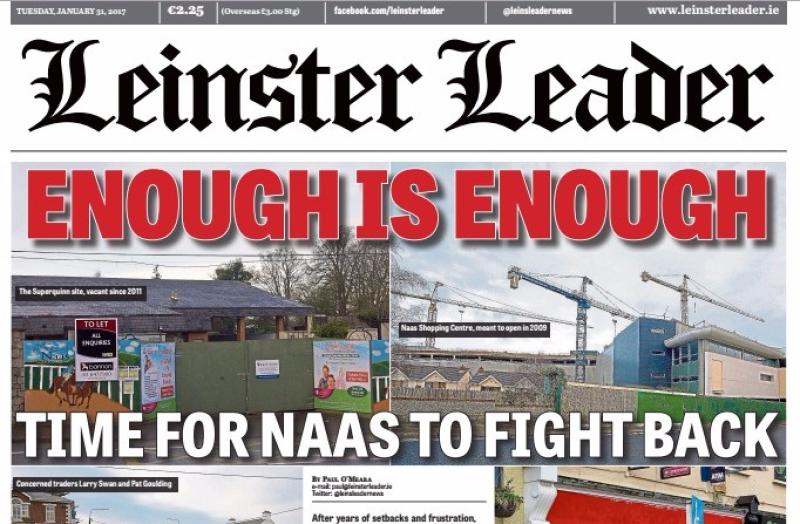 IN THIS WEEK'S LEINSTER LEADER:

In news:
* Enough is enough - time for Naas to fight back! Read our reports and analysis as locals fight for the future of their town centre.
*Community support - locals back Milltown shop and Prosperous gym owners, whose premises were wrecked by criminals
* Remembering John Hurt in Athy - fond tributes paid to world-famous actor who made South Kildare his second home.
* Concern over Curragh firing range - army hits back against bullet danger claim.
* Kilcullen school bids farewell to buzzard.
* Talks on Educate Together school provision to begin again.

Photo specials from the blessing of Newbridge cemetery, the officer graduation ceremony at the Curragh, Newbridge RFC's The Kube fundraiser, Jamming for Syria at the Ivy in Naas, Cinderella Panto at the Moat, Monasterevin Senior Citizens party at the Clanard Court, Naas RFC's Texas Hold'Em Poker night and much more.

In courts: Foal levy rules can be taken to the Supreme Court, controversial Ballysax case back in court, fine for Athy church minister, man jailed after stealing from elderly woman with dementia.

Plus all your local towns news and community notes from around the county.

In Leader Sport: Kildare boss O'Neill in a positive mood for Royal trip, All Ireland win for the Cross and Passion and GAA picture specials from Naas and Rathangan.