Lorries cause hazard on Blessington Road near Naas 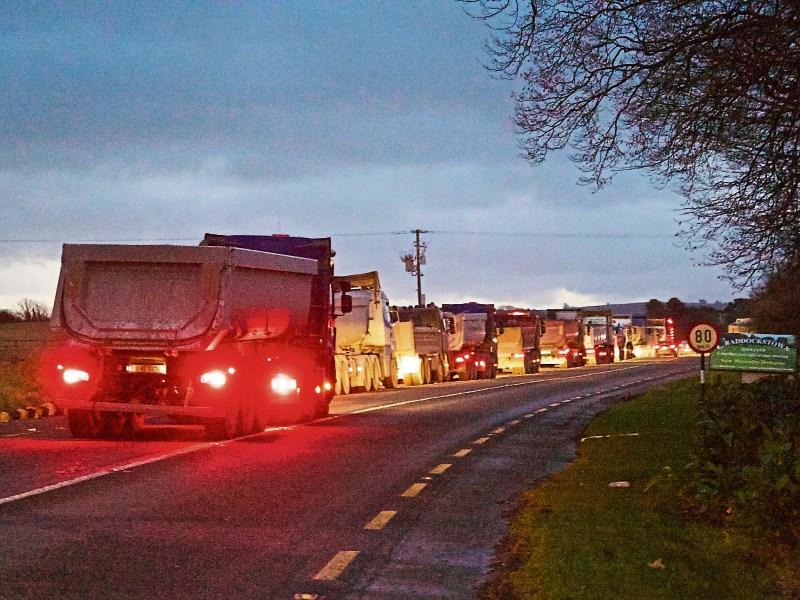 The long line of trucks parked on the Blessington Road just before 8am. Photo: Tony Keane

Trucks gathering along a road most mornings near Naas are creating a hazard for passing motorists, say residents.

The lorries are driven to the Blessington Road, near Craddockstown Golf Club, at around 8am before the opening of a quarry at nearby Walshestown.

The lorries are ferrying material to sites not far from Punchestown racecourse.

On a recent morning some 40 lorries gathered there and were parked on both side of the road.

A resident told the Leader: “When the lorries are parked on both sides of the road there is not enough room for traffic to pass safely.”

The difficulty is exacerbated by the movement of the lorries as the vehicles are maneuvered into position, sometimes crossing the road.

“There is no issue whatsoever with the quarries or how they are managed or operated and they are providing employment.

“But there are problems once the lorries are on both sides. The lorries shouldn’t be allowed there before 8am especially if they arrive in numbers,” the resident said.

More commonly though there are 15 to 20 vehicles and these numbers create much less inconvenience.

Residents living closer to the landfill sites have complained to local politicians about the deteriorating condition of the road leading to the sites and they say this is caused by the heavy lorries.

A count conducted by the residents on September 6 indicated there were more than 250 trucks or 500 truck movements on the road and claimed that it they were led to believe this figure would be much less.

Naas Mayor Fintan Brett said that many 10-wheel lorries are now using the route and described the traffic numbers as a convoy.

He also claimed that the road had been widened by at least a metre by the passing of the lorries and said money should be provided for the repair of roads affected by landfill operations.

But Kildare County Council say there is no money available to spend on additional road repairs in the Naas area.

District Engineer David Reel said that both sites have planning permission with conditions as well as licences. He also said that while a road maintenance issue exists, it is a public road with no restrictions on vehicles.

Elsewhere residents living in the Eadestown area have complained about the number of heavy goods using roads, which they claim are unsuitable for the size of some of the lorries.