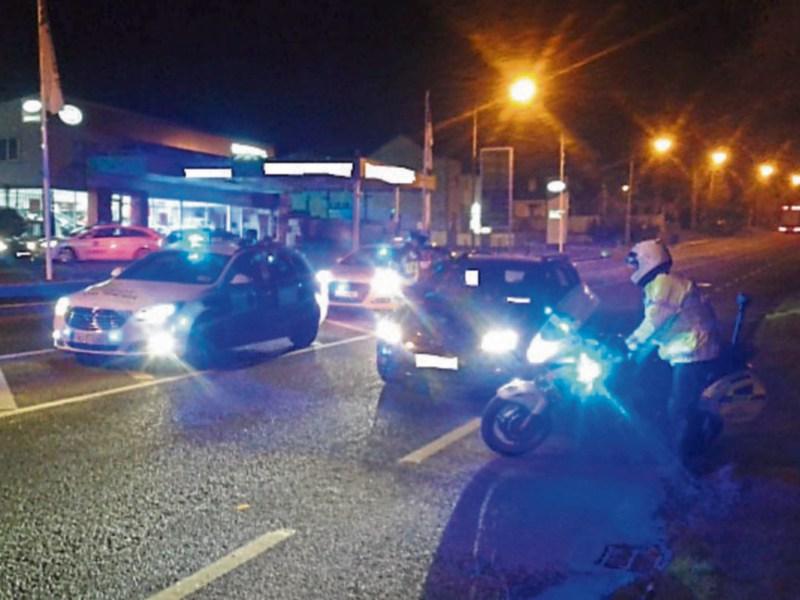 A scene from Friday night when one of the cars was seized.

In an operation which saw Gardai surround several Kildare towns last Friday night four vehicles were seized from motorists and one man was arrested on suspicion of drink driving.

In a move, known as Operation Surround, to clamp down on drink driving and road traffic crime, Naas District Gardai placed checkpoints on all approach roads to several towns on January 20.

The first was Robertstown, earlier in the evening where they carried out mandatory alcohol breath testing, as well as checking that  motorist’s insurance, Tax and NCT’s are up to date.

A source revealed that the Gardai are also hoping to disrupt illegal activity by detecting the movement of criminals and drugs.

Two vehicles were seized for no insurance in Robertstown.

Later, the operation was repeated on all approach roads to Clane. There, a man in his early thirties failed a roadside breath test and was arrested and brought to the station where he provided a sample.

Later again, in Kilcullen, all approach roads were targeted and two vehicles were seized for having no insurance.

Finally, the officers surrounded Naas and detained one car on the Monread Road for having no insurance.

A Garda source told the Leinster Leader that they can seize cars when the tax is out of date for two months or more, if the driver has no license, if the car is uninsured and if the NCT is out of date.

The source added that while it’s been some years since operations of this nature were carried out, but that he believed they were likely to be more common from now on.