Collins, Eubank and the Five Lamps of Naas in the mid 90s 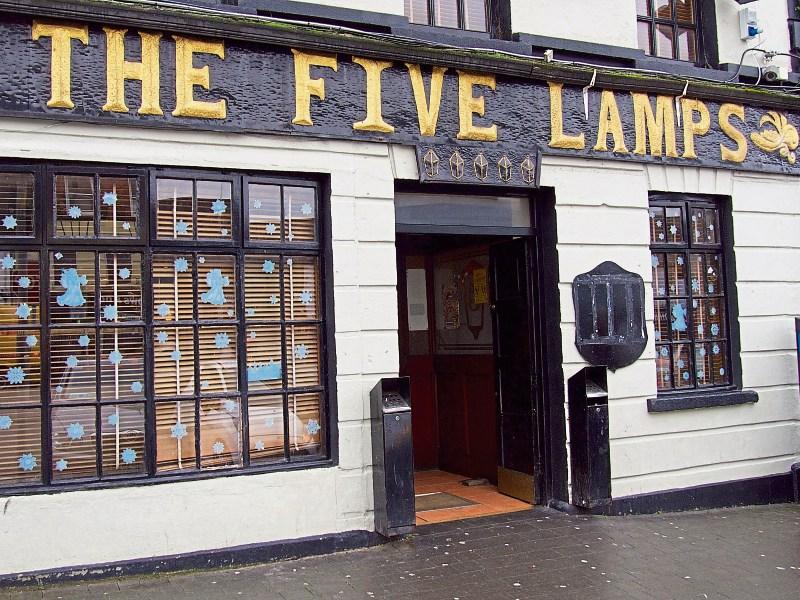 The Five Lamps, a great Naas pub and a regular haunt of our columnist around 20 years ago

We are sure it’s all very different nowadays, but they rarely used to ask for ID to get into the old Five Lamps in the early to mid-90s. It was always better to greet Tom on the door with a hearty hello than offer up some dodgy ID.

Your poorly laminated effort was better saved for the Guards if they came calling on the bigger nights, like the night Steve Collins beat Chris Eubank to win the World Middleweight title in 1995.

The fight was in Mill Street in Cork but upstairs in the Lamps felt more like Madison Square Garden.

The crowd was packed in so tight around that flimsy pen-like fence in the middle of the floor that the wooden beams creaked every time Collins landed a punch.

He landed plenty so it’s a feat of local engineering that the whole thing didn’t collapse and land everyone downstairs on top of Paschal the barman.

Because the fence had already been weakened by Ray Houghton, who goaled to beat Italy in the Giants Stadium in New York just12 months previously.

From memory, no one ever fell through the cavernous hole to the floor below, I think. And down there it was always six deep at the counter.

Part of the reason was the disparity in the price of the pints because it was five pence cheaper for your 568ml of porter at the bottom.

It’s the only instance I can remember where students were deliberately priced more for something and everyone agreed that it was fair.

So during the rest time between rounds, or at half-time or full-time in the football, the more financially challenged dropped the stairs for the discount.

It must have been the school-goers and the apprentices, but then upstairs catered for nothing but students and apprentices.

The only adult you’d ever see was Paschal when he ventured up to collect a few glasses.

Even the owner, Jim Gregory, just chanced the occasional appearance.

It feels like a strange thing to say about a pub, but for a time at least everyone was from school.

And if ever someone’s parents arrived in it was happening so rare that it was considered an event in itself. Grey hair and no hair just didn’t fit with the colour scheme of the place.

It felt like some kind of violation and it was incredibly embarrassing for everyone.

No parent stayed long and no parent would have chanced coming up the night of the Collins fight.

Even Eubank would have had cause to think twice.

Because when Collins won, the taps overflowed and tempers too later on.

It turned into Millstreet on Main Street and it took more than Tom to restore order.

But the only lasting legacy is this story.

The strange thing was how different the old Lamps was during hours of sunlight.

It was impossible to match the pub by day to what it turned into when darkness fell and students descended.

By day it was nothing but large bottles of Guinness, John Lynch’s easy manner behind the jump, and songs like Glen Campbell’s Wichita Lineman on the jukebox.

By night, upstairs, it was Southie and Red, empty cans of Dutch Gold stashed under the couch, and hard liquor we weren’t able for.

The upstairs became a place of borders and territories.

People’s pub identity belonged to the areas where they stood and drank. But mostly it was joyous, fun, ultra local and familiar.

Only after dark, though, when the floor space was filled by groups from the Tech, the CBS and St Mary’s.

The big screen dominated the back wall and it doubled as a dart board for cigarette butts the night Austria beat Ireland in a World Cup qualifying game in Vienna.

Around that time we ourselves were getting ready to bid goodnight and graduate down the road to the Paddock.