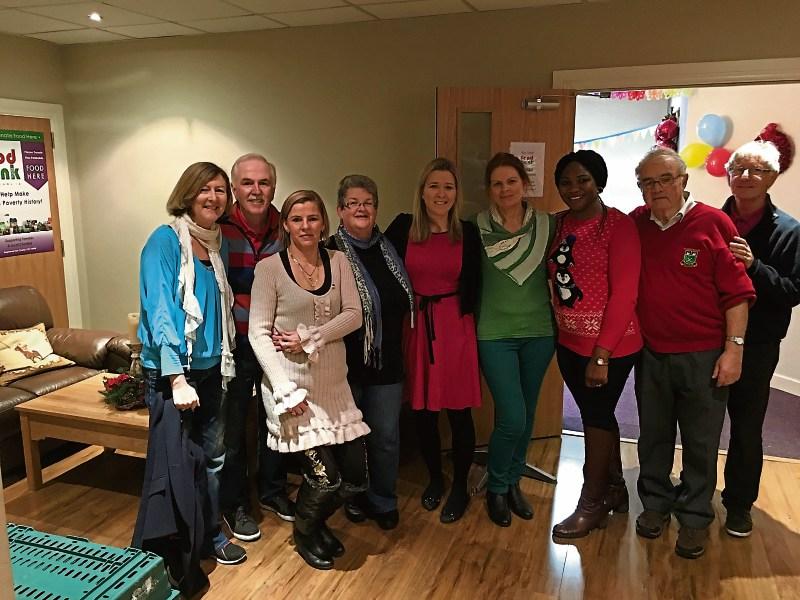 Volunteers at the Naas Food Bank at North Main Street

Demand for food parcels rocketed by 38 per cent in Newbridge this Christmas.

The Newbridge Parish Share Food volunteers gave out 180 bags of food this year, compared to 130 during the 2015 festive season.

“We noticed that number was up significantly this year and there was huge demand,” said volunteer Joe O’Brien.

With 60 volunteers on board, approximately 130 to 140 parcels are usually given each week to families and residents within the parish.

The Naas Food Bank organisers distributed 135 hampers from the Church on Main Street in advance of Christmas.

And the recipients also attended a special Christmas dinner organised at the same venue (the former cinema building) on the Tuesday prior to Christmas.

“The need for the hampers was about the same as last year,” said Fergal McCarthy, one of the initiative’s founding members.

The Naas Food Bank operates on a once-weekly basis and, on average, about 100 food hampers are taken away each week.

“The demand is steady enough and we’re grateful to all of the groups, sports clubs and individuals who help with donations all the year round.

“Without their contribution this would not be possible,” Mr McCarthy told the Leader.

He added that some €4,500 worth of food was contributed at the Tesco stores at Monread and Blessington Road during 2016.

Meanwhile, one of the three St Vincent de Paul shops in Kildare has reported receiving as many as 50 letters a day seeking support over the Christmas period.

A spokesperson for the charity’s shop in Athy revealed that requests for support were steady and consistent in the run up to Christmas — and that this was likely replicated across all of St Vincent de Paul shops in the county.

As well as Athy, there are two more shops in Celbridge and Maynooth. There are also St. Vincent de Paul Conferences, as the charities local committees are called, in every town in the county.

“But as well as numerous requests for support, we’ve also received great support from the local people coming in to the shop. We were very busy in the run up to Christmas,” she said.