Kildare farmers urged to educate themselves about Shannon Pipeline 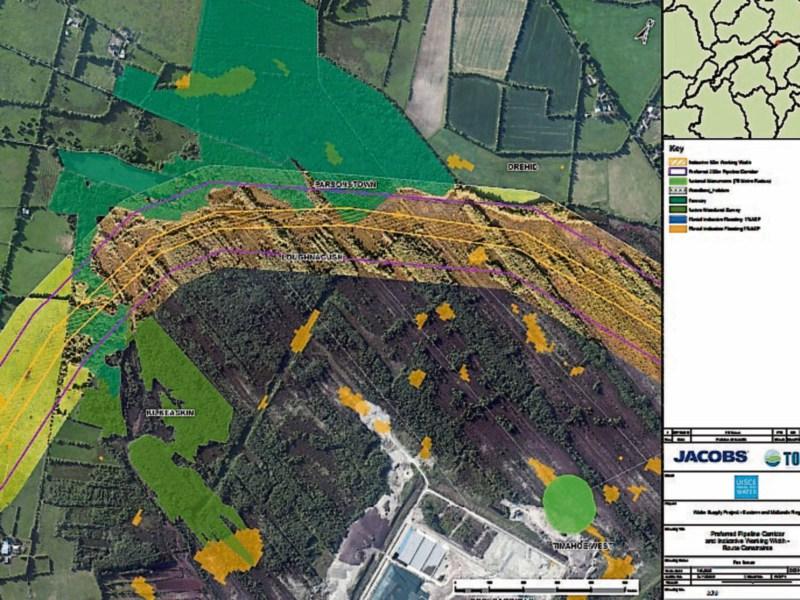 A section of the preferred route, including Drehid and Timahoe West.

The IFA has  told Kildare farmers to educate themselves about a proposed pipeline that, once built, will cut across the land of dozens of farmers in the north of the county.

The pipe is an Irish Water project which will bring water from the Shannon, at the Parteen Weir in north Tipperary, across the country to the Dublin water system near Newcastle, a total of 170kms.

It has an estimated budget of €1.2 billion and is expected to affect up to 500 landowners across the whole country, including many in Kildare – although much of the land being considered is bogland, some of it owned by Bord na Mona.

It is proposed that the pipe line will cross the Offaly border into Kildare in the townland of Sheane outside Rathangan and pass through or near: Ticknevin, Lullymore, Ballynakill, Drehid, Timahoe, Newtown, Derrycrib, Baltreacy, Clonfert,  Barberstown cross, north of the Lyons estate and up to Peamont.

In a statement, Thomas Cooney, IFA Environment Chairman said the body was very dissatisfied that, following the consultation meetings, many of the questions raised by farmers remain unanswered. He said prompt information is required on the impact the proposed pipeline would have on a farm by farm basis as well as what the ongoing impacts on farmland will be.

And a public meeting is being organised in Ashley Park House, near Nenagh this coming Saturday, December 10, at 2.30  for all affected landowners.