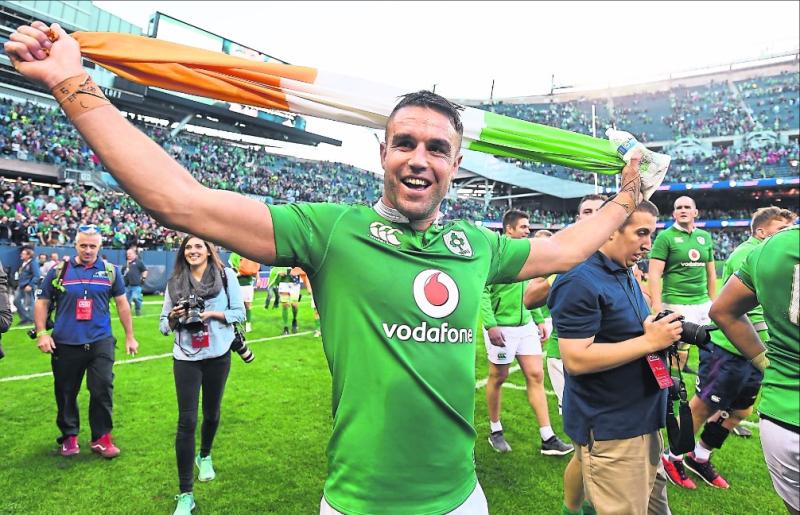 “I hope the All Blacks hockey Ireland.”

A good friend of mine posted that on Facebook the night before the Ireland-New Zealand match in Dublin a couple of weeks ago. He was savaged. The social media outrage-ometer - which revs along at a high level anyway - burst right through the red line. Heavy words were lightly thrown; friendships tested.

You can't say that about the guys!

How could anybody be so unpatriotic as to cheer against an Irish team - albeit one steeled by a couple of South Africans?

I could understand why. I didn’t agree with his sentiment - I’ve always enjoyed watching the Irish rugby team - but do see how somebody could get thoroughly fecked off with the sound of the rugby juggernaut crashing into their local every winter weekend.

So, for the purposes of reconciliation, I’m trying to do my bit by listing some of the more bewildering terms you will hear shouted at the big screens of Kavanagh’s or Johnson’s or the Silken Thomas of a Saturday. Then we’re giving their meaning.

With a little more understanding we can all stand shoulder to shoulder and celebrate our citizenship of Rugby Country.

2. His game management is superb*: There is no higher calling than management and even when playing or watching sport you should be thinking along managerial lines. I work as a manager by the way.

3. Excellent hang-time Murray, now get up Trimble, UP-UP-UP-UP: I coach an U14 team.

4. Let’s light up a few rucks: This sounded good when Eddie O’Sullivan said it about about the France game at Croke Park for the 07 Six Nations documentary. We don’t mention the World Cup that followed.

5. We need to draw in the cover in by attacking tight around the rucks and then, boom, hit them with a wide-wide pattern: The €16k a year my parents spent on Clongowes fees was not money wasted.

6. Nice loop Jonny: Jonny ’s got great hands and his game management skills are unrivalled and when he gives a pass he’ll run around the other side of the receiver and look for the ball back instead of just slowing down and watching what happens next. What a man.

7. Savage line speed: Nothing to do with the rate at which Class A’s disappear in Dublin pubs that charge €6.80 a pint. This, instead, is a measure of how fast the defensive line moves up on their targets. I think. Put on another Heiny there please Bill?

8. Building a score: Let’s try and score some points. Because if you score more points than the opposition you … win the game!

9. He’s off his feet Nigel/He’s holding on Nigel/HE COMES IN FROM THE SIDE THERE NIGEL, AH COME ON NIGEL: I know the rules, and if the ref walked in here and ordered a Smithwicks I’d greet him by his first name. He may not know my first name.

10. Our accuracy is all over the place: I’ve finished my seventh pint and just opened a bag of Taytos for the table without making a mess. Why can’t these lads on the screen make as few mistakes as I do?

11. Depowering the scrum has killed the game: I was a prop once. It was great.

12. YES, YES, HAVE THAT READ, we’re winning those collisions now: Tadhg Furlong was me. Kieran Read was my boss when he gave out to me for having the Q3 top-line analysis document on his desk an hour late. I hate my job.

13. That move was straight off the training pitch: I trained a bit once. The guys on the screen train. In the ways that matter, I’m just like them.

15. Their line is up waaay too fast Nigel, got to be offside: And the ref’s name.

16. Either way, the citing commissioner will get him: Justice always prevails in rugby - except when the All-Blacks “stepped over the line” against our guys. The power of their brand allows them to play on the edge.

17. Go on ROG/Paulie/Donners/Strings/Drico/Shaggy/Darce/err Kearney: I met that guy once at a Newbridge Silverware launch event with the better half.

19. We got dominated in the tight five, we weren’t hitting our lines, our go-forward ball was non-existent; it could be that’s Schmidt’s gameplan is too dictatorial, we deserved to lose: Err, maybe we should switch that TV over to the Liverpool game, Klopp has them playing well now .... How are Kildare shaping up? ... What time is the Conor McGregor fight on?