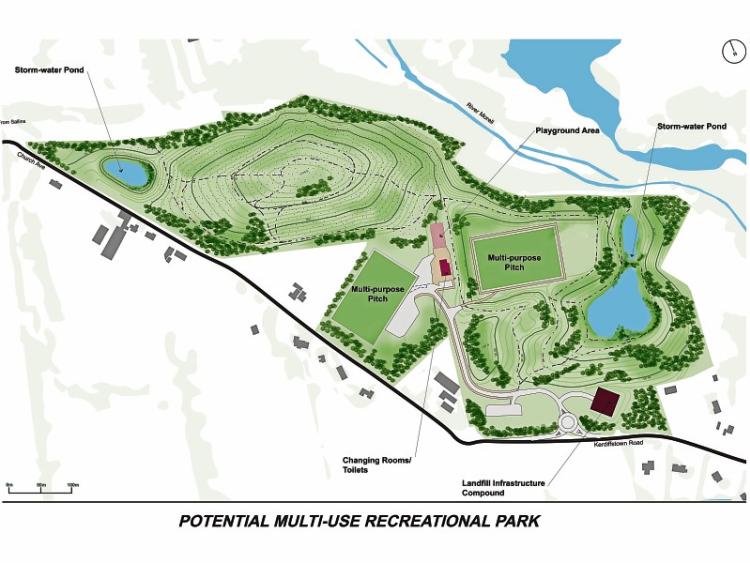 An impression of what the restored landfill site will look like

The new public park planned for the landfill site at Kerdiffstown, Naas, could be open within seven years.

No firm timescale for the opening is yet available but the completion of the restoration work at the site will take five years and the preparation of an environmental impact statement could take 18 months.

The 75-acre site was once among the most controversial dumps in the country.

In January 2011 a series of fires began to burn deep within mounds of waste and site emitted noxious odours as well as plumes of white smoke.

It was eventually closed by a court order and it emerged during the court hearing that Neiphin Trading Limited, the company which operated the site was in financial difficulty.

The multi-million euro clean up operation has been ongoing since then. It was initiated by the Environmental Protection Agency and since June 2015 has been managed by Kildare County Council.

Naas councillor Seamie Moore has pressed for the site to be made available for public use once it has been fully remediated and all 39 submissions made to KCC about the possible future use of the site supported this.

The site is within 800 metres of housing areas; it is 1.1kms long with a perimeter of 3km perimeter. Some 3.1 million cubic metres of waste was dumped there — enough to fill Aras Chill Dara 70 times.

Kevin Motherway, a scientist working on the project, told a Naas Municipal district meeting that while some domestic waste was taken there most of the refuse is construction waste.

Some 200 holes have been drilled on the site to assess the potential for pollution and this risk has been described as “negligible”. Borehole drilling continues.

Neither is there a pollution threat from leachate.