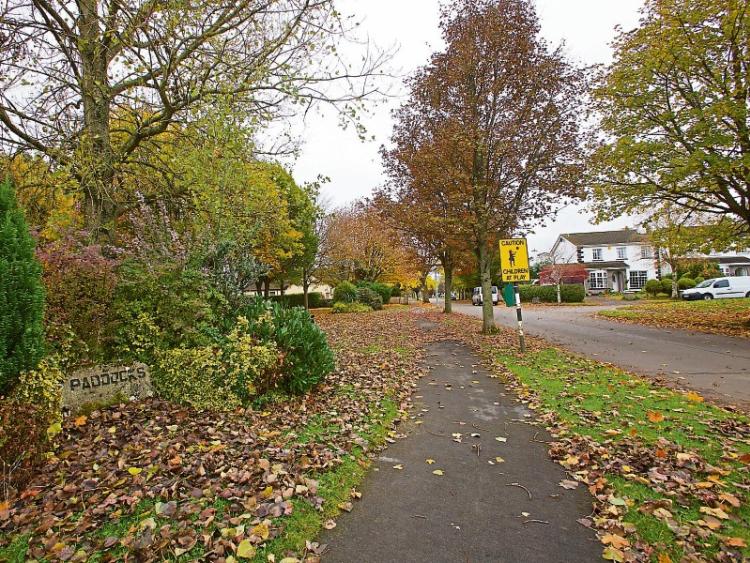 The Paddocks was like England — out on the edge, a few good footballers, but never quite enough of them. Photo: Tony Keane

I wouldn't know half the new estates in Naas now but the generation of housing estates built in the 70s and 80s backboned the town. The late John O’Connell out up a lot of them there and each had its own identity.

Ballycane felt like it leaned in on top of Lakelands and it grew taller again at Halloween. Their bonfire was something spectacular. Before it became fashionable to burn Trump-like towers of pallets in Belfast they were stacking 'em high in Lacken View, brought in on a convoy of shopping trolleys from Superquinn.

By their lofty standards the burn only qualified as a destructive statement if the Fire Brigade were called from the Fairgreen. You'd see them tearing past the hospital, sirens blaring, lights flashing and one big cloud of sparks later it was all damp and over.

If Ballycane was a State it might have been Russia, cowed by nobody and ready to take on anybody.

Which is why Cleevaun next door was more like Switzerland — neutral, independent, respected as a peacemaker because of their strategic position right next door but without the numbers to intimidate anyone.

But then Rathasker Heights actually was Switzerland. It was full of people who worked in banks, wore nice suits and lived in architecturally impressive properties with driveways long enough to park three cars. Sure, not everyone wore a Rolex watch but you knew it was the kind of place Kerry Packer might live.

Gratefully, they’d get a clip from Patrician Crescent across the road every now and again.

Everyone built houses with cavity blocks then so an estate formed of red brick was a real statement. That’s why people emigrated to Roselawn. For a better life. I mean you never heard of anyone coming back.

The estate represented a finishing school, a statement that you were going somewhere much further than the couple of hundred yards down the road. Kind of like Monte Carlo but in the pissings of rain and with no sea. And like Monte Carlo, visitors/students poured in there during the summer, got drunk, treated the green like a playground then left again.

The Sycamores was another island of prosperity only you didn’t need a visa to cut through from the Dublin Road to the Sallin’s Road. Then they blocked up the throughway-like-Suez-Canal and I haven’t passed that way again since.

Up the Tipper Road, Woodlands felt like the kind of a American estate you’d see in an 80s Steven Spielberg flick. It was all tree-lined roads and large suburban homes with BMXs everywhere. Everyone was probably watching the Andy Griffith Show, or Happy Days with Henry Winkler.

Though that was more likely to be Hollywood Park on the Sallins Road.

Woodlands didn’t have the edge Ballycane did. It was sedate, like Holland, but without the weed.

And the Paddocks was more like England — on the edge of town, indifferent to ideas of local unity but with a few decent footballers and the eternal promise of hoisting the Cup.

In terms of confusing names, Kings Furze on the Dublin Road always felt like a misnomer. There was royal trappings like a tennis court, but I don’t remember any budding Boris Beckers and you’d be more likely to get a belt of a racket than any tennis ball.

The estates further off down the Sallins Road never really made much of racket. They were too far away, and Monread too remote to be really considered before it was conquered by the Dubs and gave birth to a pub.

An estate with a pub really would have been something to shout about in the 80s. We just had a lake. It divided Lakelands into north and south, though really the separation must have appeared like east and west Germany. With a huge water feature and the kind of green space that would make a developer salivate.

We most probably deserved our posh billing. And, damningly, we never did pull off one of those bonfires.