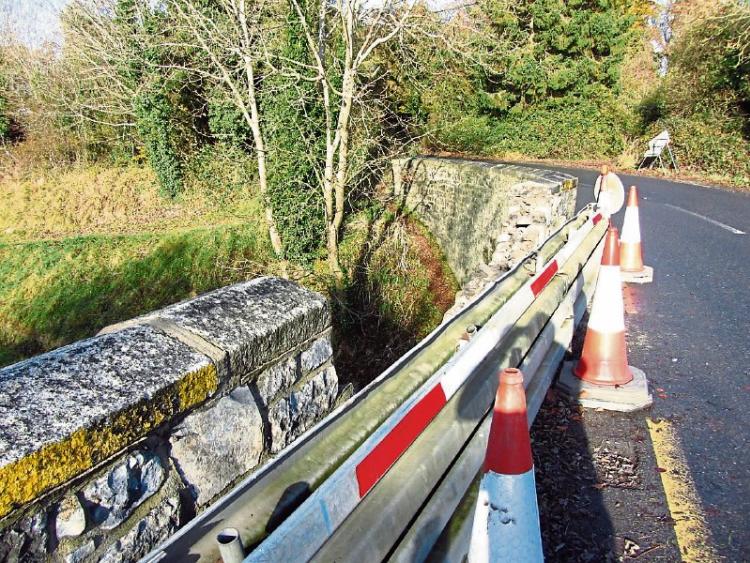 A temporary barrier protects motorists from the missing sidewall of the bridge.

For the second time in less than a year, the Cock Bridge over the Grand Canal has been badly damanged, forcing the erection of a stop/go traffic light system.

The bridge, which crosses the Grand Canal at Donore on the Caragh to Prosperous road was the scene of two crashes in the past two weeks.

The first crash damaged a metal barrier, which had been erected after the wall of the bridge was rebuilt last year to protect it.

The second crash, early last week, knocked out the entire side wall of the bridge — with debris falling into the canal and along the bank more than 10 metres below.

Kildare County Council has issued a statement saying they are engaging with Waterways Ireland in relation to repairs to the bridge.

Bridges in the Caragh area have taken a battering in the last 18 months, with the closure of the Liffey Bridge between Caragh and Naas for several months while it was being repaired.

The railway bridge on the Newbridge road out of Caragh has had limitations put on it, with a stop/go system put in place and a restriction on larger lorries.

The Cock Bridge, like much of the rest of the Grand Canal, and accompanying infrastructure, was built in the last decades of the 1700s.

It gets its name from a building which known as an alehouse called ‘The Cock’.

That building is now gone. It was replaced in more recent times by a private dwelling, known locally as Tommy Everett’s house, and the infamous Caragh Orphanage. The ruins of both are still visible.