COMMENT: Spending €120m on Kildare roads will not reduce traffic 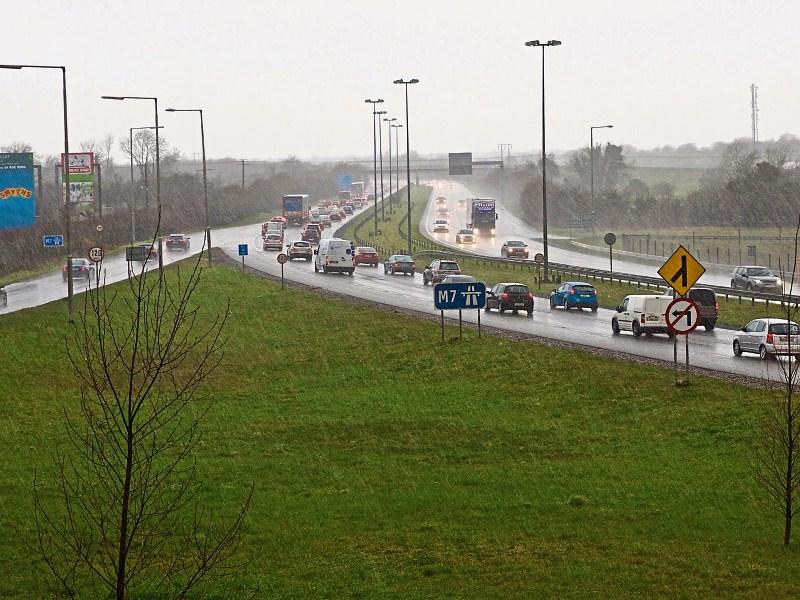 A future picture of this stretch of the M7 will likely show a traffic jam of three lanes, instead of two

Leinster Leader readers will have learnt this week that it would cost €10m to complete the Naas ringroad.

Last week they read that the bill for the trio of road upgrades around Naas — the M7 widening, the M7 interchange and the Sallins bypass — will be €110m.

These figures are so great that you see them and don’t do a double take. What does €120m look like? We have very little comprehension of a sum such as that.

If you saw a headline saying the Council spent €90,000 renovating a couple of houses then that would likely make you pause. Ninety grand is tangible. We appreciate its worth; know how long it would take to earn.

But these figures in the hundreds of millions, we scan them but cannot compute.

We should dwell on them longer.

This, I admit, is a hobby horse of mine. I disapprove of the building of new roads in the way many people disapprove of (far smaller) investments in cycling facilities.

A few minutes Googling phrases such as “induced demand” and “more roads equals more traffic” will tell you all you need to know about how much time these roads will save us in the long run — very little, if any at all.

Take a look at the M50 story in the news this week to confirm what we can already see. Transport Infrastructure Ireland say that with 159,000 drivers using the road every day, the issue has “reached a point of breakdown”.

But back to the money, €120m. Before we let that number slide past us we should perhaps think about what it might buy instead of roads.

We have an extensively documented housing crisis in Ireland. Kildare is hugely affected by this. There are 7,000 on the housing list here, plus thousands upon thousands of people not on the list but being affected because they are paying colossal amounts of rent homes given the scarcity of supply.

€120 could fund the construction of in the region of 800 council houses (if we take construction costs at €150,000 per house which was the figure forwarded by the Society of Chartered Surveyors as the ‘hard cost’ building a three-bed semi).

What would have a greater social benefit to Kildare? Thousands of people housed or four new roads that will soon be clogged with traffic the same as the existing ones are now?

There are many other areas of need. We could just easily get into working out how many schools, nurses’ salaries, library facilities, playing fields, etc could be bought for €120m.

Or, more pertinently, we could urge that this giant sum be spent instead on other more economical and less environmentally harsh modes of transport.

If the whatever-it-takes-we’ll-raise-it approach that holds sway for roads was applied to rail transport, we’d be looking at more carriages, more services and cheaper fares to get people in and out of Dublin. We’d be looking at old lines such as the one that went through Naas and down to Tullow being relaid. And there would be an underground system in Dublin.

Instead, asking for this seems fanciful, hopelessly naive — never mind the fact that most European capitals have underground trains and far more overground lines going in and out of the city centre.

Also, were cycling viewed as a genuine way to get commuters to and from work the Grand and Royal Canal would have been paved as a (relatively inexpensive) priority long ago. You could cycle from Naas to Harcourt Street in an hour to an hour-and-a-half depending on you speed. You’d do well to crawl there as quickly in the rush hour traffic.

Trains, overground and underground, safe cycling routes, more buses. These are the ways to cut congestion.

You cannot road-build your way out of huge traffic jams.

Has this approach worked for urban Ireland so far? Has it worked anywhere? ... Show me one city where they had gridlock, then widened roads and built new ones and found that the jams were cut dramatically.

Simply, cars takes up too much space. The same as in any urban part of the world, there are just too many of us in the Greater Dublin area for us all to drive.

It’s a not a case of, ‘we should be looking at alternatives, long term’. We have to find alternatives now.

€120 for some new roads around Naas will soon be followed by urgent calls for full ringroads in Newbridge, Clane, Kildare every sprawling commuter town. And then there will similar demands for the M7 to be widened at the new pinch point — probably around the M9 turnoff, and then beyond and beyond ... but the traffic will not go away.

This problem will never stop, until we decide that there are many more efficient uses for our scarce public money.