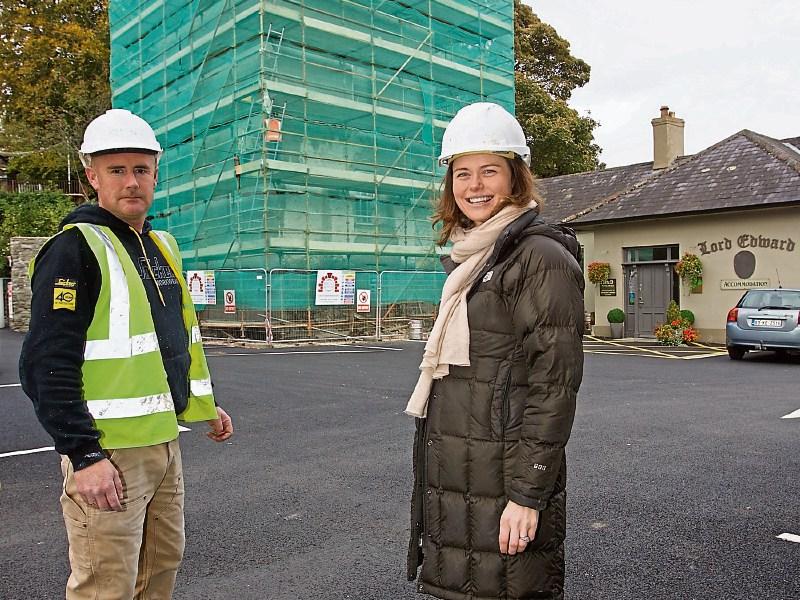 The first phase of the  restoration of Kildare Castle’s gatehouse is currently underway at the back of the Silken Thomas .

The gatehouse dates back to the 13th century and Strongbow is believed to have built the first wooden castle structure there while an Earl of Kildare is rumoured to be buried in one of the walls.

According to Tara Flanagan of the Silken Thomas who took the Leader on a tour of the gatehouse, this year marks 700 years ago that the castle was attacked during the Bruce invasion.

“Thankfully they were unsuccessful in taking over the castle and 1316 marks the year that John Fitzgerald was given the castle by King Edward II to reward him for his loyalty and John was awarded the title of the first Earl of Kildare,” said Tara.

The restoration has been ongoing since October 2015 and has cost €60,000 to date, which was funded in part from Kildare County Council and the Heritage Council. It is estimated that the project will take three years to complete and cost approximately €350,000. Possible plans include two new bedrooms, and an interpretive visitor centre.

“We have had the ivy removed and currently with the help of funding from Kildare County Council and the Heritage Council we have been able to undergo an extensive rendering works project,” she added. “With the scaffolding in place the views are great from the centre of Kildare Town as well as having the opportunity to see the walls and features of the walls so closely. We have even been able to get into parts of the castle that we haven’t seen before.

“The conservation architect believes it could be Ireland’s oldest continuously inhabited building. The story is fascinating and so many people in Kildare don’t even realise it exists.”