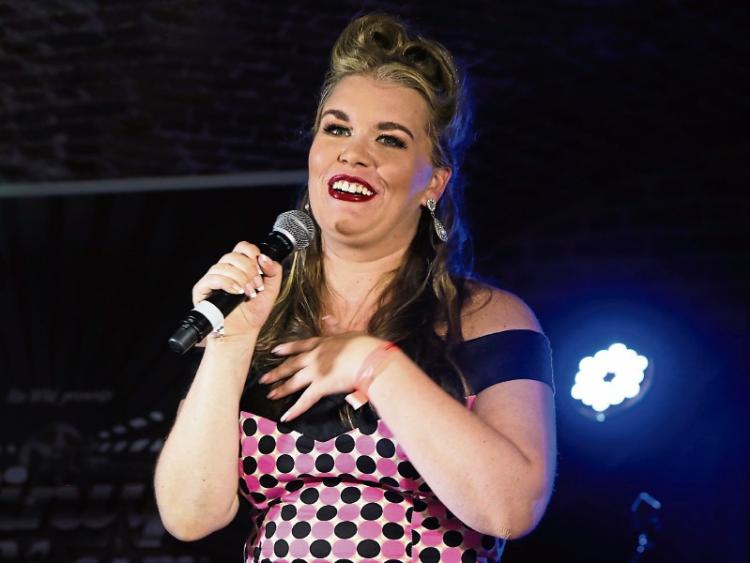 Accompanied by a small entourage, Sue Kelly made the trip to London for the Miss Pin-Up international event, finishing in second place behind the Norweigan winner.

Sue, from Teampull Carach, had previously been crowned Miss Pin Up Ireland to qualify for the international event, which took place as part of the 12th London International Tattoo Convention.

The LITC is a event which showcases the work of the top tattoo artists from across the globe.

Sue made the trip accompanied by her mother Mary and sisters Anita, Lisa and Emma and three friends. And while there they went to see what was Sue’s first professional show (she’s a member of Naas Musical Society).

“I was thrilled to be runner up to some fantastic girls and it was a great experience. There were entrants from Italy and Australia. Each of us had to do some kind of talent like performing burlesque, singing, playing an instrument or doing some kind of performance piece. There was also a question and answer section,” Sue told the Leader.

More than all of that though, the 32-year-old has done much to highlight the negativity suffered by people who don't measure up the size zero concept.

“I hope to keep the momentum going to prove that you don’t have to be a size 8 or 10 to do things like this.”

Sue said that as a result of winning Miss Pin Up Ireland she has received many emails from girls saying that she had been an inspiration that “they felt better about themselves in that their weight does not define them.”

She added: “This is what I’m probably most proud of. I’d encourage every girl who wants to to enter Miss Pin Up Ireland because a lot has changed for me in terms of confidence and the experience was a once in a lifetime happening.”

As a size 16, Sue has had to endure some abusive comment about her weight but is signed to the plus size modeling agency, Model Management.

She was once a size 6 and at the time was working so hard to “have the perfect body” she fell into depression having had an accident at work and gained weight.

“However once I got help for my depression, I realised that being a size 6 wasn’t going to make me happy,” she said.