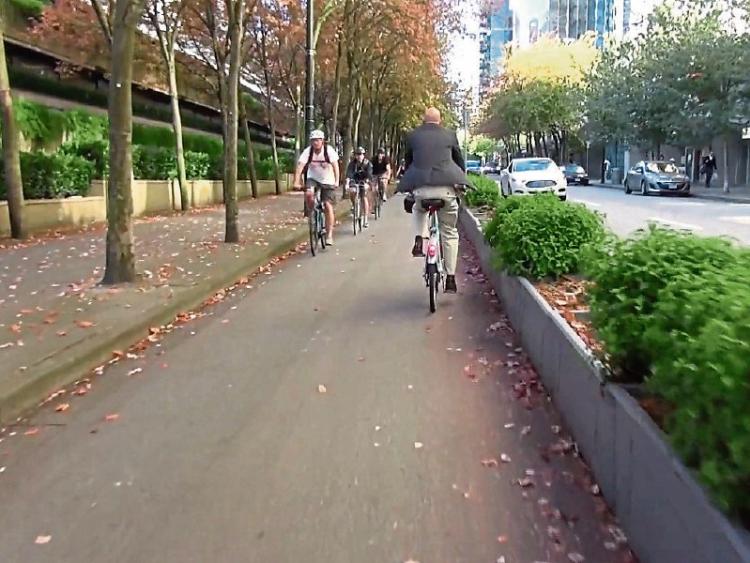 A typical street scene in Vanvcouver

Go to Vimeo (Youtube for people with notions) and look for an account in the name of Streetfilms.

It’s not the only one, but it’s a good example of a documentary about somewhere in the world getting on board with the whole cycling thing.

Naturally enough they started off in places like the Netherlands and Denmark.

Anyway, back to Streetfilms, who've done a great little documentary on what’s been happening in Vancouver over the past decade.

The western Canadian city has seen such an explosion in cycling that now a full 10% of all trips within the city are done by bike, well ahead of what they had hoped for by now.

They have a very active section of the Department of Transport, which is forever tweaking bike lanes, intersections and other places where two and four wheeled traffic meet each other.

There is now an absolute assumption there that cycling is here to stay, that it is a growing and preferable mode of transport and that it’s worth spending lots of money on to encourage that growth.

A lot of it is really really simple, stupidly simple. In several areas they’ve just lined up loads of rectangular flower pots on the street to separate cyclists from motorists. Simple, and kinda unexpectedly good looking, and very, very effective.

They’ve created small (but high-kerbed) traffic islands to warn motorised traffic that this is most definitely a cycling lane.

Watching the short video, you’d be forgiven for getting all excited about these great little innovations and to miss the greater point.

While these innovations are clever and interesting and smile-inducing and make us want to visit Vancouver and hire one of those bikes (that look suspiciously like the Dublin City Bikes), the point is that they’re the really easy bit — they’re absolutely the inevitable consequence of what happens when clever and qualified people are hired by local authorities to have and to implement a proper cycling strategy.

The hard part is getting the local authorities to have and to implement a proper cycling strategy.

There is a frustrating and headbanging sense that at a national and local level here in Kildare and in Dublin (where a protest on the issue will take place next Monday evening) that the people who make decisions on transport just don’t get it.

There are several really important reasons why pouring a load of money that is normally reserved for our roads into cycling would be a really great idea.

They are, in no particular order: the general health of the nation, easing congestion, annoying Michael O’Leary, making our urban centres more attractive, the environment and tourism.

They may be indirect consequences, but are not inconsequential. Studies have shown that these are things that either save or generate enormous pots of money.

However, more importantly, there is also one reason why we no longer have any choice.

Quite simply, and it should be clear to anyone who can see it, the greater Dublin area has already slipped into the never-ending circular stalemate of building new or wider roads to accommodate more cars than was anticipated the last time they built or widened a road.

We’re now in the inherent and inevitable ‘build it and they will come’ cycle of constantly trying to firefight our road infrastructure.

Several things haven’t occurred to them.

2. We’ve passed the tipping point. We should now be working to reduce the number of cars on our roads, and the closer we get to the centre of our largest urban areas, the more we should be doing it.

3. The money they’re wasting on new roads would generate far greater value for money if put into cycling lanes.

4. The ‘build it and they will come’ approach also applies to cycling lanes — that’s the experience of Manhattan in New York, where Mayor Michal Bloomberg pushed through cycling lanes against ferocious opposition, and before there was any great lobby for them.

But practically overnight, New Yorkers took to cycling lanes like ducks to water and in the space of a decade the big apple has transformed itself into one of the world’s greatest cycling cities.

If New York can do it, surely so can Kildare and Dublin.