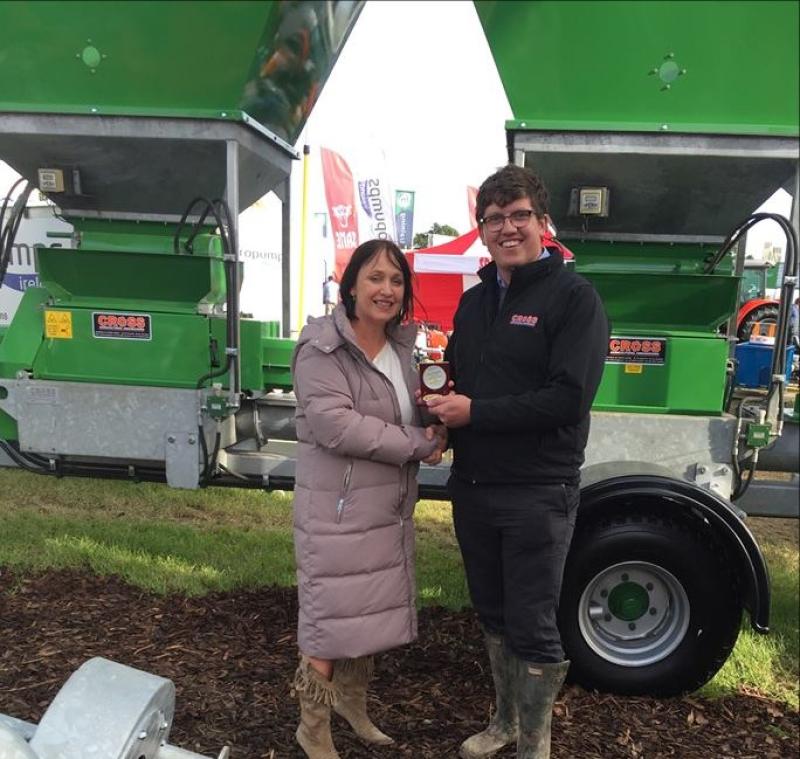 Gary Cross, the fifth generation of a well-known Rathangan business family scooped a gold medal at the National Ploughing Championships for his innovative design and modification of a chaser bin.

The 21 year-old student adapted the harvesting farm machinery as part of his final year project in Mechanical Engineering course at DIT Bolton Street last year. Gary modified the traditional chaser bin so that now, instead of being used once a year only for harvesting,  it also can be used as a driller-filler.

Fellow Rathangan native, Deputy Fiona O’Loughlin was delighted to see Gary’s work recognised and was on hand to give him a hearty hug after he was announced the winner of a gold medal for Innovation in International Machinery.

"Great to see a Kildare man recognised at the NPA awards, and even better, a Rathangan one. I’m no expert in farm machinery but apparently, Gary’s prototype means the chaser bin can also be used as a driller-filler in Spring and Autumn, thereby maximising the use of this  agri-equipment which was previously used only for harvesting," she said.

Cross Engineering was established in 1985 by Gary’s father, Simon. The company is no stranger to winning awards for their innovation in agricultural machinery design, having developed superior slurry pump agitators, folding ring roller, furrow press and the beet chopper and chopping plant, the latter having won a Prototype Award at the Spring Show at the RDS in 1992