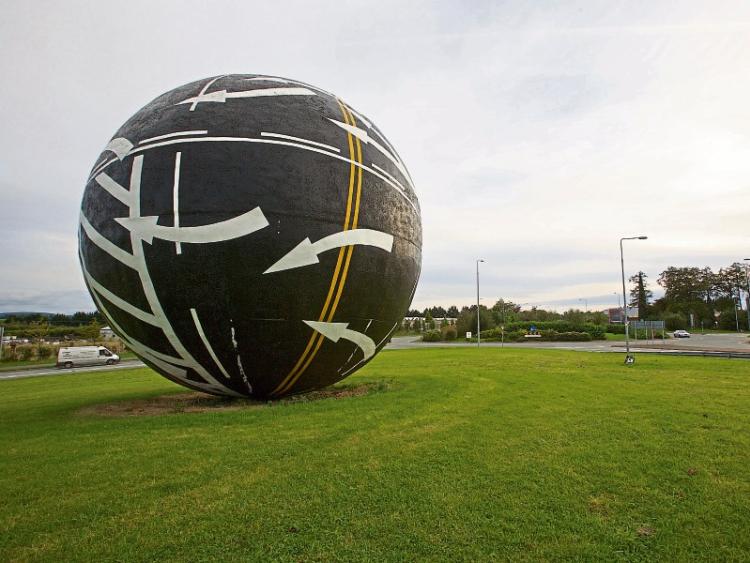 Efforts will be made to improve safety at a dangerous roundabout junction outside Naas.

The Maudlins Roundabout, better known as the location of the “Big Ball”, carries traffic travelling between Dublin and Naas as well as providing links to the Monread Road and Johnstown/Kill.

The section of the motorway between Johnstown and Kill is among the more congested routes in Ireland, carrying 78,000 vehicles in either direction daily.

The problem at the roundabout is that motorists leaving the Dublin Road in Naas and heading towards the capital should enter the roundabout from the right lane; however many enter from the left.

There are similar, though less pronounced, problems with traffic entering the junction from the Monread Road.

Sinn Fein councillor Sorcha O’Neill said although road markings are in place “there is a problem with people using the left hand lane cutting across those driving to Dublin as well to Johnstown.”

Cllr O’Neill wants overhead signs on the road leading to the “Big Ball” informing drivers which lane they should use.

“The signs on the road don’t seem to be effective enough because there are many close calls as people try to access the N7 from both lanes,” she said.

Kildare County Council is to consult with Transport Infrastructure Ireland.

KCC District Engineer David Reel said this is likely to mean that more signs and road markings will be provided.

He said: “This can be done at a reasonable cost.”

He was not immediately in favour of overhead signage for cost reasons.

Nevertheless he said that these would be considered if the initial measures don’t work.