Fergus Lennon, one of the Unsung Heroes of Newbridge 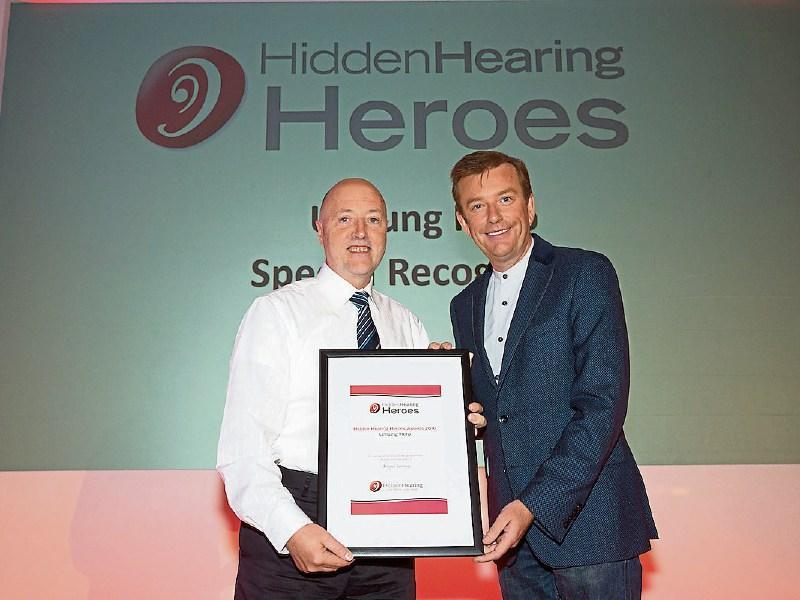 Newbridge man Fergus Lennon was one of a number of Ireland’s Hidden Heroes crowned in a Dublin ceremony recently.

Broadcasters and celebrities were out in force to crown Ireland’s Hidden Heroes at a national awards ceremony hosted by Hidden Hearing in the Double Tree Hilton Hotel.

Broadcaster Mary Kennedy joined Hidden Hearing’s managing director Stephen Leddy to present 21 people with awards in recognition of their achievements and contributions to communities throughout the country.

Fergus was nominated by his daughter, Avril, in the Unsung Hero category.

Fergus is an unpaid volunteer with Blood Bike Leinster.

He started the charity group two years ago and it involves going out to deliver medical and blood products between hospitals, day and night and in all weather.

He also collects donor breast milk for premature babies from the only breast milk bank in Ireland.

Another Kildare recipient also received an award. Linda Allen was nominated by Sharon Fidgeon for the Triumph Over Adversity Hero category.

Linda is a single mother to two beautiful children and her daughter is now 22 and a trained social care leader. She worked two jobs to pay her mortgage and bills.

“Her ability to cope with this devastating situation is both inspiring and incredibly brave,” said Sharon.

Linda has written a book – ‘See you in two minutes Ma’ in which she reveals so much of herself and aims to help others to cope in such tragic situations.