Kildare girl Hollie (4) is no longer locked in her world 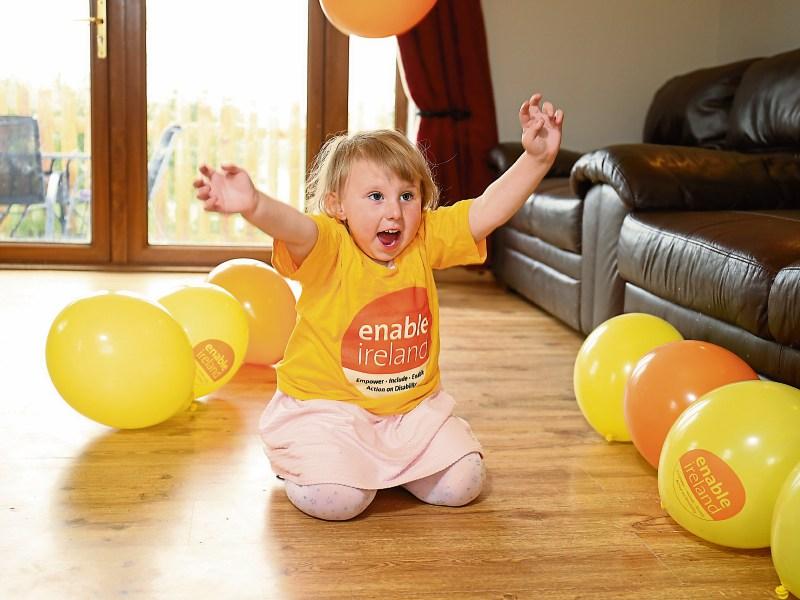 Hollie Kenny (4) was locked into her own world until the transformative services of Enable Ireland helped her share that world with her family.

“We didn't know her favourite food is pizza or her favourite colour is red or that she loves going for a drive in the car,” explained her mum Una who lives with Dad, Anthony, little sister Grace (3) and little brother Tony (seven months), near Moone.

Before Enable Ireland, Hollie wasn't able to talk but now, with the aid of her iPad, she is able to let her famiy into her world. Now she can tell her family she loves them and according to mum Una she can let them see her cheeky side as well as her love for chocolate.

“Hollie has low muscle tone and she found it very hard to sit up and crawl. When we first came to Enable Ireland in Kildare, Hollie was a year and a half and because of her delayed development she couldn't sit up or talk. Since then, the services at Enable Ireland, and in particular the Assistive Technology, have transformed her life. She can say ‘I love you mum and dad’”.

Hollie will be getting her first wheelchair in September.

“I was anxious about this at first but not anymore,” added Una. “It's a sporty, lightweight chair and she was even doing wheelies in it when she first tried it out. Hollie is complex - she is non verbal so she doesn't speak. She uses the ipad to speak and a walker to walk and she goes to pre-school now in Baltinglass. She can now do as much as the other kids can.”

Support Enable Ireland's awareness campaign by buying a €2 or €3 pin, trolley disc or wristband from and help to support children and adults with disabilities this week.