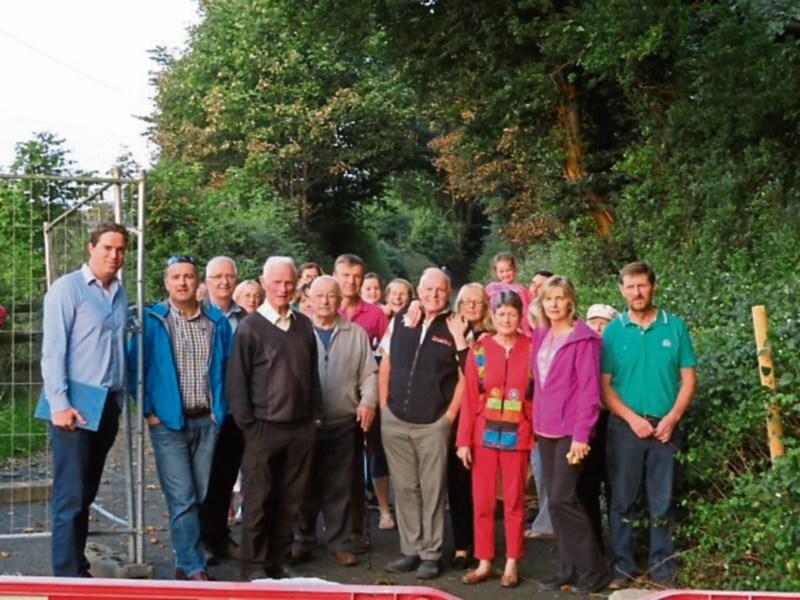 Up to 40 local residents met at Coughlanstown last week, along with Deputy Martin Heydon, to discus the recent closure of L6048 (Coughlanstown) road.

A burst water main earlier in the month had resulted in serious subsidence of the road foundation and adjacent river bank and hence, for over three weeks, the road was officially closed by Kildare County Council with local access only.

However, even for local residents, it now means they must drive an extra three to four miles to get to Ballymore Eustace, with many of them living only a half to a mile from the village.

Having reviewed the serious erosion of the river bank along the road, the group then retired to Mary and Anthony Campbell's home to discuss the situation.

From his initial evaluation, Deputy Heydon felt that this would not be a quick fix.

He agreed that the road is an important artery for local residents and equally important to support the local economy of Ballymore Eustace-based businesses.

There is a long standing principle that roads should not be allowed to close by default and Martin highlighted the example of M9 construction where L roads were protected at much expense as they were essential arteries for local communities.

He also expressed concern about the impact the road closure was having on the surrounding road infrastructure.

“On Thursday last, I raised my concerns with local Council engineer and the Director of Services to find out what steps the Council have taken to date on options to re-open the road and to get a timeline on how long they envisage that it will remain closed,” said Deputy Hedyon.

“I have asked the Council to give me assurances that they will do whatever is necessary to re-open this road given its importance to the local community. I have also asked for additional resources to be assigned to the adjoining local roads to take account of the increased traffic volumes while the Coughlanstown Road remains closed”.

Residents noted that roads now being used as the diversionary route are particularly poor with bad surfacing, multiple potholes and are quite narrow.

They also expressed concern for local Water, Sewage and Gas supplies that need to be protected from further erosion of the roads sub-surface. Deputy Heydon also agreed to inquire if major work needed would require a special allocation from central funding as Annual budget only covers normal road maintenance.