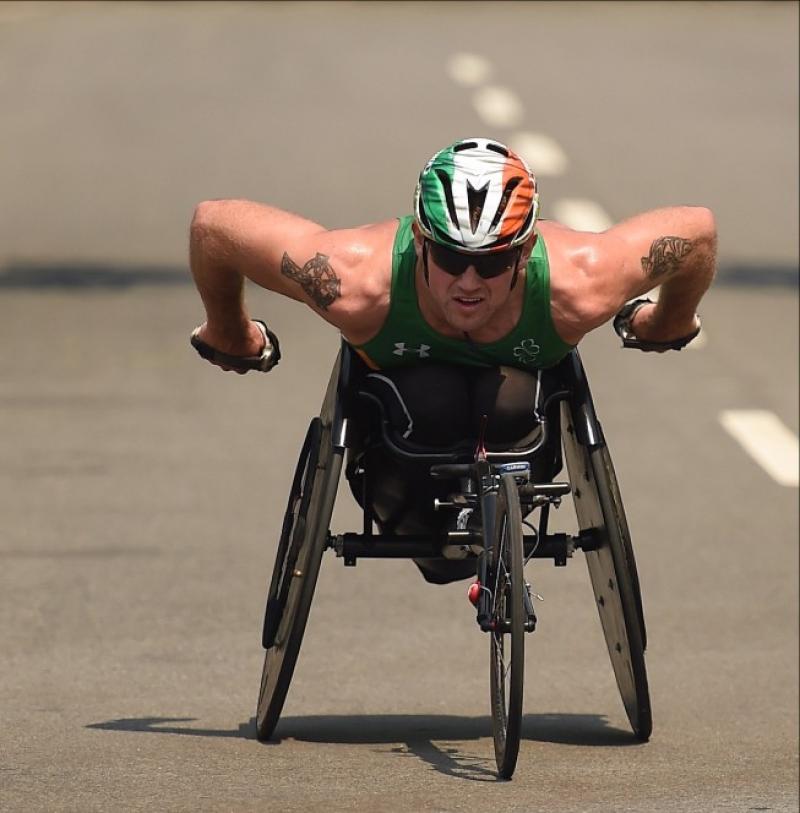 Patrick Monahan in action in the marathon. Photo: Sportsfile

Four Kildare and West Wicklow athletes will be amongst Ireland’s 48 strong Rio 2016 Paralympic team to wave goodbye to the athletes’ village today and begin their journey homeward.

The team is scheduled to touch down in Dublin Airport just after midday tomorrow (Wednesday 21 September) and make their way to the Arrivals Hall in Terminal 1 at approximately 1pm to meet family, friends and the media.

The team exceeded all expectations in Rio claiming four gold, four silver and three bronze and claimed a 28th placing on the medals table; inside the top 30 spot targeted at the outset.

After four days in solitary confinement due to illness, Caragh’s Patrick Monahan made his Paralympic debut last Saturday, enduring searing temperatures to finish 16th in the marathon.

Several racers dropped out in 32 degree heat, but Patrick, who was forced to withdraw from the 800m earlier in the week, bravely battled on to finish the race.

“If it was any other marathon I would have dropped out after a lap,” said the elite wheelchair racer.
“I had no energy at all, whether it was the heat or the illness last week I’m not sure, but I was drained. I knew it was going to be tough but I didn’t think it would be that tough.

“I was in bed for four days, in solitary confinement,” he revealed,
“But I was really well looked after and did some light training but in the end I was just happy to get to the finish.”

Asked what kept him going to the finish line he said: “My mam and dad are here, my family and girlfriend at home, the support I got from my community and club (Le Cheile), I just had to get to the finish line.

“I didn’t think there was a sport out there for me four years ago but I love this sport. I’m proud that I’ve got this far in quite a short time. I wasn’t happy with the time but, in some ways, it was my greatest achievement getting to the finish line today.”

Fellow Kildare man, Sean Baldwin was also upbeat about his performance in Rio over the past two weeks.

In a highly competitive field, the Newbridge sharp shooter failed to make the finals in each of his disciplines but he put in some impressive scores.

On finishing his final event, the R6 50m Rifle Prone, he remarked: “The heat was up, the wind was up and my form was up as well. It mightn’t look like it on the scores but I really shot some great scores today. I got caught out a few times on the wind but I felt really good.” Reflecting on the games, he said: “This is what it’s all about, every four years the games come around and to represent your own country at these events is amazing”.

Meanwhile, Kilcullen Cycling Club member, Ciara Staunton finished 14th in the H2-4 Road Race.
“Words don’t describe though how it feels to represent Ireland — it’s been a long time goal to get here, the only person who would have stopped me from getting here was myself and now I’m looking ahead on to Tokyo,” she said.

Dunlavin’s Helen Kearney, who has only been working with her new horse Rock and Roll 2 for two years, was competing the para dressage competitions.

“I’d have loved to make the Freestyle but I think, after the first day, I had to manage my expectations and knew I wouldn’t quite make it,” she said.

“Overall I’m really pleased with the horse and how it went today but just disappointed with the score. I’d have loved to have done a bit better for myself and for everyone at home as well, but it obviously just wasn’t my Games this time,” added the West Wicklow rider.