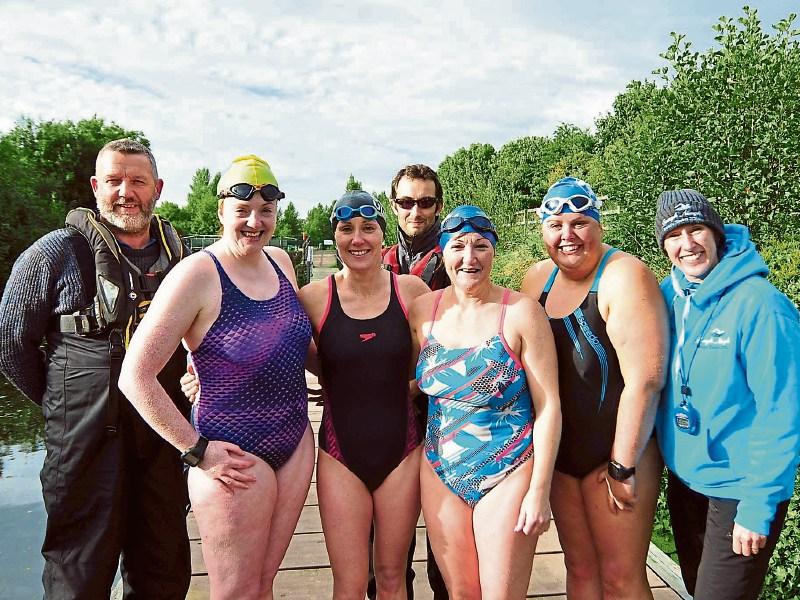 A Rathangan woman recently took on the might of Lough Neagh, completing an epic 10-hour open water relay swim with three fellow adventurers to cross the largest lake in the British Isles.

Mary Bolger Hinds, who lives in Tannary Wharf, was cheered on by her husband Paul on Saturday September 10, who also captured the amazing feat through his camera lens.

“We achieved the challenge and it was an amazing adventure to have had with the girls,” said Mary, who had serious sciatica problems the previous Monday.

“I was barely able to walk. Only for Catríona from Nurney GAA carrying out physio on me, I don't know what I would have done,” she said.

By the time Saturday came, Mary was ready. Her son, Pierce was playing a basketball blitz for Portlaoise Panthers, so both he and his teamates were following the team’s progress between matches online, while his brother Austin was cheering on his mum from home.

Nicknamed The Swim Sisters, the team consisted of one swimmer from each Irish province. The team wanted to raise money for the Make a Wish Foundation.

At 32km long and 14km wide, the lough can throw up tough obstacles, becoming very choppy in the exposed central part.

The challenge began at 6.26am when Claudine walked down the slipway at Kinnego Marina in Co Armagh. Her team mates cheered her on from aboard the boat, piloted by South Shore Marine’s Paul Quinn, who was accompanied by Safety Officer Chris Walsh and ILDSA Observer Maureen McCoy. Under Channel Swimming Association rules, the ladies each swam for one hour, following the same order of rotation.

As the end loomed, Mary was able to bring the team in all the way to Toome Lock, touching the jetty at 5.14pm after 10 hours and 48 minutes.

Through the generosity of the team's sponsor Hose Doctor.ie, the team managed to raise a considerable amount for the Make-A-Wish Foundation and are close to their target.

To help them reach this target please log on to www.give.everydayhero.com/ie/swim-sisters-lough-neagh-swim

Mary thanked her husband Paul for his support and helping her secure as much time as possible for her training in the run up to the swim.

She also thanked Portarlington Leisure Centre, where she works as a swim coach, and also her colleague Aoife Byrne for her support.