From Lawlor's Ballroom to Pluck the Duck at the Five Lamps 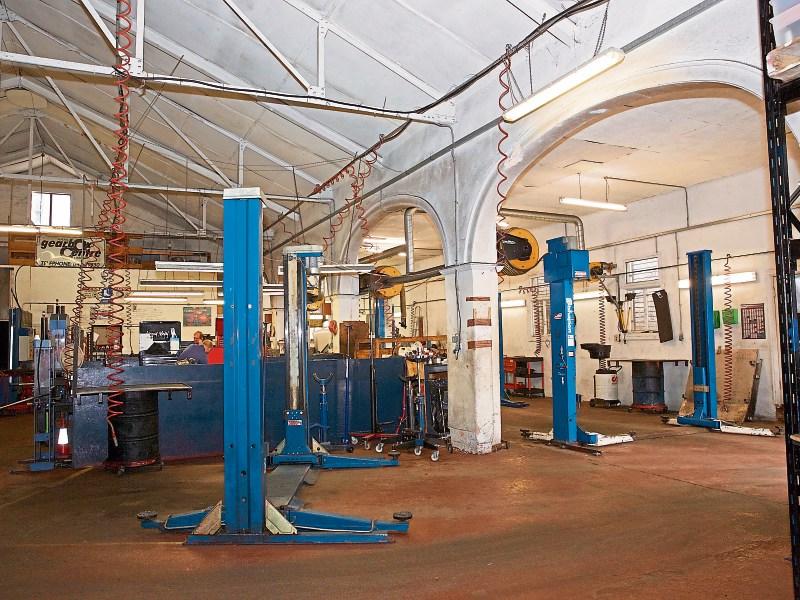 The inside of the old Lawlor's Ballroom with the old arches, now home to Naas Gearbox Centre. Photo: Tomy Keane

We used to hear how people travelled for miles to watch Geldof do the rat on the 18-century spring-loaded floor.

But growing up in the 1980s, the ballroom was just a run down building beside a carpet shop until ‘The Underground’ disco blew new life into the place in the 90s.

In 1993, Big Generator arrived and filled out what was once the ballroom.

They were no Geldof, no U2 but you’d never have guessed — the queue to get in was a sizable snake of Doc Martins, black rock t-shirts and faded blue jeans, or leggings if you were a girl.

The stomping Are You Going To Go My Way by Lenny Kravitz was released the same year and the cavernous acoustics of the ballroom made for a deafening cover.

There was rows of tiered seating either side of the dance floor, dim lighting and dark walls but you couldn’t get a drink in there. This was entirely understandable — we were 14.

Still, the front entrance was a scatter of empty bottles and those Kravitz guitar riffs landed like shocks of sobriety.

Naas didn’t do a huge amount of live music then so an appearance by Big Generator had students scaling walls, splashing through streams and cutting through the jungle at the back of Alpha Carpets to beat the queue.

Before that the Battle of the Bands in Stirrups helped fill the local live music void.

There were coming from a school of bands with names like Riot Act and then popular albums with titles like Chaos AD by Sepultura.

They are words that summed up the energy on the dance floor where students beat the hell out of each other in the name of moshing.

And the teachers could do nothing but prowl the perimeter of the dance floor while Tom Cross dropped people home on coaches heavy with battle fatigue.

As a live act, Pluck the Duck struck a different note but no less stirring note in the Five Lamps pub in the main street.

The revolution started every Thursday around nine o’clock with A Nation Once Again and the place used to be whipped into a frenzy long before Free the People played out the finale.

We’d sit by speakers. The sound blasts were powerful enough to stir your pint.

When the Johnstown Inn reinvented itself as the Soundhouse in the late 1990s, Aslan took up residency. The Dubs were sold as the hardest working band in Ireland and it was tough to argue with that billing.

It felt like their frontman Christy Dignam was down to perform every week, on stage with his socks off sometimes, caressing the carpet with his toes.

The band’s hit, Crazy World, played on loop every Friday night and soon more gentle acts like The Four of Us were playing places like the Red House. It was so sedate we were almost crying for the kind of chaos we used to experience in Punchestown and then the Oxegen music festival rolled into town and pitched up on the racecourse.

After a checkered history of live music, of listening to bands with B-side prospects, the thought of James Brown passing through Beggar’s End was hard to fathom. Never mind him coming to play.

It felt like the moment in the Commitments when Joey the Lips told Jimmy that Wilson Pickett was joining them to jam. No one could quite believe it but it was happening, here, against the backdrop of Ballymore. Brown, Green Day and David Gray, gyrating on stage just a few furlongs away from what was once Stirrups. What was once the live music event.

God knows what Larry Cunningham would have made of it.