When Naas rugby was the talk of the Towns 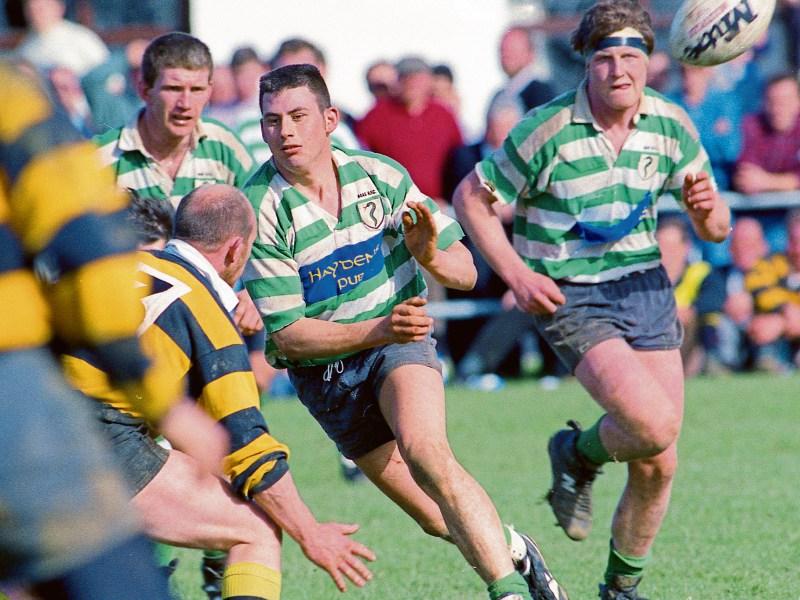 There’s a report from Naas’s 1995 Provincial Towns Cup win on the wall at the back of Hayden’s pub. It’s a framed broadsheet page, 21-years-old now, and it offers a window into time when this competition rooted feet to the ground and fixed elbows to fences.

This is not really the time of year to be talking about the Towns Cup. But reading the report again recently got me thinking about that year’s semi-final when Naas played Carlow in Old Kilcullen.

I was on the U18s in Naas then so I was familiar with the pitch in Rosetown but never did I witness this kind of local rugby occasion. The crowd were so many we were forced to try and squeeze in behind the posts and beyond the goal line.

I remember spectators sat on top of the roof of the clubhouse for a better view, cars parked in precarious positions on the road to Athgarvan and I remember most of the rampaging runs of Carlow’s No 8, Andy Melville.

The New Zealander cut a distinctive look — all unruly hair, black and amber jersey pulled from his shorts with his socks rolled down. And he had a way of standing about with hands on his hips before exploding from his dormant state and off down the field.

He was an unorthodox talent and as much a part of the victory conversations as Naas winger Mark Waldron who downed Melville with a match-winning tackle only minutes from time.

Naas had been beaten in previous Town’s Cup finals in previous decades so this victory really registered.

There was a buzz about the final against Enniscorthy; about players like Donal Walsh, David Nevin, Ross Murphy, Mark Cuddihy, Mark Fitzgerald, the mercurial English import John Corbett who played at out-half and Kiwi coach Kevin West.

The rugby landscape was very different in 1995.

Reports about club matches involving Lansdowne, Shannon and St Mary’s often led the rugby coverage in the national media and Naas had players who went on to compete at that level.

That was the quality and we had weekly access to it.

So after Melville and Carlow the final felt like a formality. It was. Naas won 17-6. There was an open back lorry, open tabs in Hayden’s and the town then hosted the final the following season in front of a crowd of nearly 6,000 in Forenaughts.

Carlow beat Mullingar and cars were strung out in lines around the Tipper triangle. I remember refusing the President of the Leinster Branch, Stan Browning, access to the member’s bar because I didn’t know who he was. After someone put me right I skipped off bar duty to watch Carlow players whos names I still remember. Like the Hannon brothers, Justin and Larry, scrum-half Leonard Peavoy and out-half Harry Sothern.

During the Punchestown Festival in 1997, I got chatting to Carlow’s then wing-forward, Ivor Edgehill. Stood there that Sunday night in the Naas Court he was surprised that a couple of 19-year-olds from Naas would know who he was, know the names of all his teammates, players with monikers like ‘Timber’ from Tullamore and a host of other provincial town starlets who featured regularly in Forenaughts on winter Sundays and in front of big crowds. It was visceral often passionate and sometimes the referee had to send spectators off.

Naas were consistently knocking on the Town’s Cup door then but Geordan Murphy and James Ferris were unable to pick the Carlow lock before they departed for Leicester Tigers in 1997. But enough talent remained to take the 1998 version against Kilkenny in Enniscorthy.

By then John Sheehan from Hillside had replaced John Corbett at out-half and for me the identification with this success was even greater, because he was our generation.

We drove from Naas, two in the front, three in the back and one in the boot, stopping for pints and a game of pool the far side of Bunclody.

It became a default pitstop on the many Town’s Cup trips to Wexford in the years that followed.

The competition fixed our social schedule and filled so much of our aspirations. Because to win one, in the context of a then vibrant club rugby scene, was regarded as something significant. Not just a ‘First’ grade triumph but at second and third grade too.

The medals could be used as currency in pub conversations in the same way as Kerry All-Ireland winners might use their medal successes to outrank each other.

In the early 2000s I remember being sent to report on a Town’s Cup draw conducted by Tony Ward in the old Lansdowne Road not long before the stadium was levelled. Then in 2005, I received a call from the late great Paul Donaghy to cover the final in Navan between Naas and Boyne.

From Dublin but long domiciled in Carlow, Paul was a highly regarded local rugby writer who had reported on every provincial rugby match of significance for generations.

Having never played a Town’s Cup tie, I remember his invitation to write about the final feeling like a great privilege.

With the advent of the European Cup, and the corrosive effect that had on Ireland’s club rugby competitions, the shine off the Town’s Cup wasn’t 1995-bright by the time 2005 rolled around. But it still mattered greatly, and it remains something for Naas players who have that edition of victory framed on the walls of their own homes.

Ironically, Andy Melville was by then player-coach for Naas while Mark Waldron, the star of the 1995 semi-final, was part of that success too, finishing his career with three Towns Cup victories.

I remember in 2006 when a Naas team won the thirds Town’s Cup in Ashbourne. On the way home the bus made a pitstop in McDonald’s and a plastic mannequin of Ronald was kidnapped and taken back on the bus back to Naas.

There was some disquiet when the mannequin was brought into Hayden’s for a pint but even at thirds level the achievement was significant enough that the pub would just have to put up with the company of Ronald for the night. That probably wouldn’t happen now. But at their peak these were halcyon days fired by fierce competition, deep-rooted rivalries and quality players.

If you need more verification, it’s framed on the wall down the back of Hayden’s.