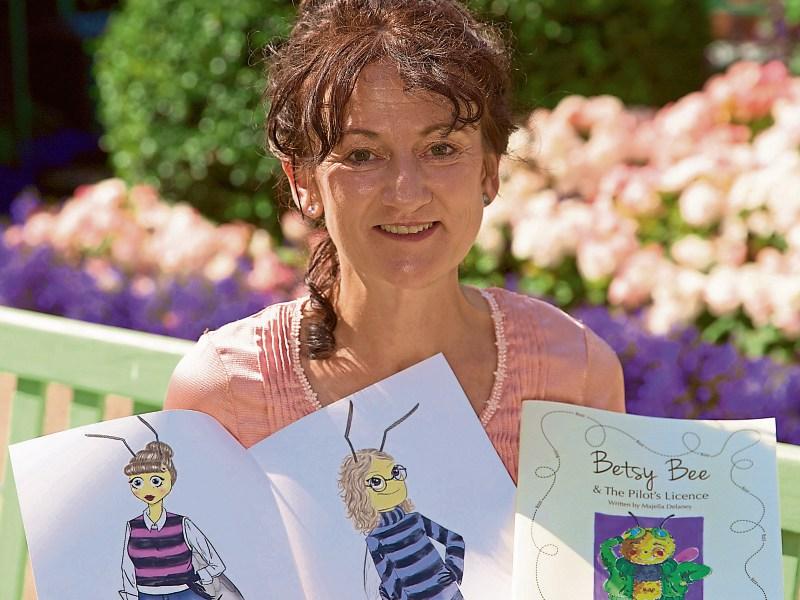 Majella Delaney with her first book, 'Betsy Bee and the Pilot Licence' and the draft sketches for her second book, which is out before Christmas

The character of Betsy Bee is very precious to Majella Delaney.

Her face lights up when she talks about this mischievous little bee who causes mayhem wherever she goes. She has been a figment of her imagination for 13 years, but last June this little character came to life when Majella's first children's book was published.

“I have a big suitcase that my mother gave me when I went off to college. It has everything in it, old letters, wedding cards, you name it. Back in 2003, I started writing about Betsy Bee but I just threw it into the suitcase and left it there,” said Majella.

“Then about six months ago, I took it out and I said I had to do something about it.”

School copies with lines upon lines of neat pencilled sentences run off the pages as Majella looks back at the first drafts of her stories.

She recalls how one teacher told her she was useless at writing back in her school days.

“I always loved writing poetry and I loved keeping diaries but I never really wrote anything else,” she said.

Spurred on to get her books published, out came the laptop and she started to type up the adventures.

She contacted Carrowmore publishers in Dublin. With the advice of Ronan Colgan, “Betsy Bee and The Pilots Licence” was released last June. New to the whole area of promoting a book, Majella then had to get the word out about her project, which she admits is a daunting task.

“I went in to Farrell and Nephew in Newbridge and they agreed to stock it. I mean I didn't write the book to be famous or rich, I just wanted to write a book,” she said.

Since then John Treacy from Irish Educational Supplies has contacted her to arrange to get the book into the libraries.

Excellently illustrated by Kildare town's Hollie Murphy, the book has a vintage feel with an essence of Beatrix Potter's style. Hollie is passionate about design and the book has a beautiful spirit. It is aimed at five to nine year-olds, but could be read to younger children.

Not one to let time pass by without action, Majella has finished the second book in the series, which sees Betsy try to become a beautician. This is due for release before Christmas and will be illustrated by Alice Power, graduate of Dublin’s IADT. She is currently working with illustrator Miss Led in London and is starting her masters in Kingston University this September.

This will be aimed at eight to eleven year-olds, but would also appeal to teenagers. Majella has also completed the third book titled “Betsy and the Camping Trip” and is planning a fourth.

She has just received Aoife's draft illustrations from London and is thrilled with their sixties vibe.

She is also currently awaiting word from Easons as to whether they will stock her books. A resource teacher at Suncroft National School for 23 years, Majella is hugely appreciative of the support she has received, especially from her family.

Her eldest daughter Annalee (21), who is studying fine art photography, was one of her mum's main drivers behind the project. Alec (19), Fathia (14) and Jake (12) are also big fans of the books.