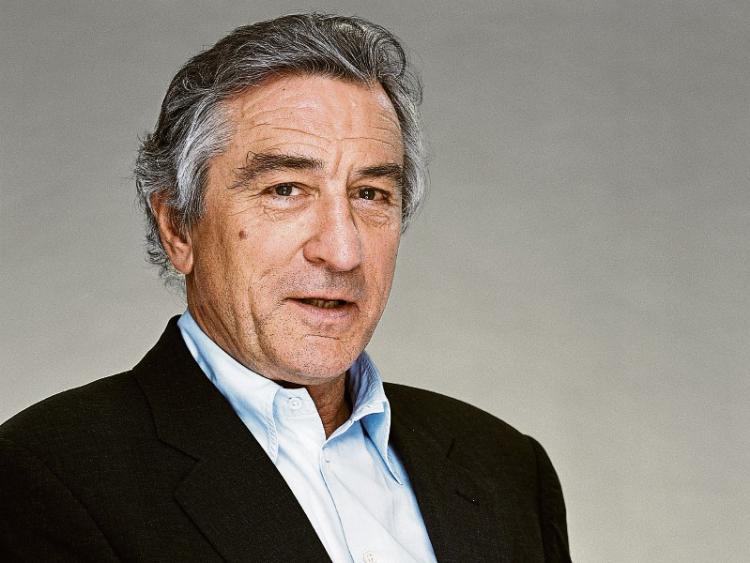 Robert De Niro, had a pint with Bono in the Old House in Kill

Some famous visitors to in-or-around the county town in my lifetime. and a few from before.

Robert De Niro: You’re queuing for punt in Woodlands Park and Robert De Niro muscles in front of you to place a bet. It’s 2003, the same week he was voted the second greatest movie star of all time in some poll or other. I still can’t decide which is the more surprising: him being in Naas or finishing second. Later, himself and Bono dropped into the Old House at Kill for a jar. Imagine the surprise at finding yourself stood beside him at the urinal.

Tiger Woods: Legend has it a taxi was called from Naas to collect Tiger Woods who was then at the peak of both power and fame but floundering around those manicured fields in Straffan’s K Club. When the driver arrived he is said to have asked Phil Mickleson if he was Mr Woods - the career of which had spectacularly passed him by. He got the right fare eventually.

Sean Connery: I’m not sure how often he came to Punchestown but more than once I saw him sauntering past with the shades on. Typical James Bond, his horse, Risk of Thunder, always won and he always left with the swag.

Paul Newman: His relationship with the county is welded to his work at the Barrettstown Camp but I like the improbable story which recounts the night he went looking for the former and great racing car driver Mick Roe. This was a time before mobile phones so Newman had top poke his head through a few doors on the Main Street to ask for his whereabouts.

Paul McGrath: To see the Black Pearl on the main street in 2002 was a surreal sight. It didn’t feel too long since he humbled Roberto Baggio in the Giants Stadium in New York and though it was actually eight years, and his knees must have been even more shot up, he still looked like he could play. A local doorstepped him and asked for a re-run of those moments in New York.

President Nixon: This was before my time and prior to the Watergate scandal which led to his resignation. So with his reputation still untarnished old Nixon must have wondered why he was so unpopular in Ireland. Apparently, the only welcoming party was a few hardy souls stood waving as he passed Murtagh’s Corner.

Niall Quinn: He's well established around the place now but post World Cup 2002, his stock was sky high thanks to that header which fell kindly for Robbie Keane to score against Germany. Soon, the Eadestown footballers snapped him up. Later, in a match against Sallins, he nailed a couple of penalties. As he was leaving the pitch someone mischievously asked why he didn’t put his hand up to take one against Spain, who beat Ireland in penalties at said World Cup.

John Bruton: His time as Taoiseach feels almost as fleeting as his pitstop in Kavanaghs in 1995. I don’t know why he was there or what he had to drink but it was a bitterly cold day so maybe he went in for a warm by the fire. A friend of mine was working behind the counter and he'd jokingly defer to this high profile punter by his Christian name thereafter.

Ronnie Wood: 1995, it feels like a different lifetime. Dropping a cement mixer out to some new build at the back of Prosperous, we were dragging it out of the trailer when we realised it was Ronnie Wood’s place and him laying on a sun lounger in the garden plucking away at a guitar.

Sonia O’Sullivan: One of the greatest athletes of all time used to be a regular visitor to relations in Lakelands. One of the neighbours tried to sell her a Gameboy. That’s how long ago it is. The sale wasn’t made.

Jack Charlton: He was some kind of a higher being in the late 80s and early 90s so to hear of him settled into a chair in the Paddocks was a thing of wonder. He was friends with Donie Butler, then of the FAI, and he was somehow accessible, impossibly so, when set against his shooting stardom.

Maeve Binchy: Firefly Summer - a novel set in a rural town. It was the late 1980s in a Naas bookshop and a fleeting signing visit still endures because it's sometimes mentioned at home.

Martin Johnson: The guest speaker at a Naas Rugby Club lunch in the Killashee Hotel, Johnson was still wallowing in the outcry of his disrespect directed towards President McAleese ahead of England’s demolition of Ireland in Lansdowne Road in 2003. Yet he won the crowd pretty easily however through his comedic recall of that afternoon. That and coming over to do the speech as a favour to Leicester club mate Geordan Murphy.

Paul Burrell: Lady Diana’s former butler was holed-up in the county town when writing a book about life with the British Royals. We used to see him ambling around the place wearing a long coat and walking a small dog.

And one from a longer ago...

St Patrick: I can’t imagine Naas in 440; can't picture the King of Leinster living atop the Moat and St Patrick stopping in for the chat. Or trying to. He was told by one of the King's servant’s that the great one was snoozing. St Patrick left unimpressed and with a parting shot that the King better be careful, he might fall asleep and never wake up. It became known, and is still known, as 'The Curse of Naas'.