We called Tommy Fletcher to get some satisfaction

Did he really bar the Rolling Stones? 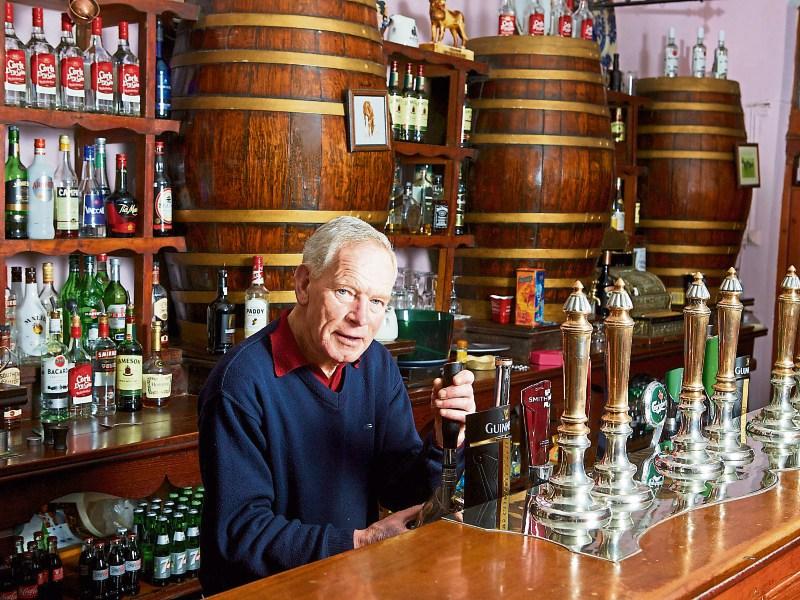 The tale of Tommy Fletcher barring the Rolling Stones from his pub is one of the Naas’s most celebrated stories.

Only no one is quite sure what happened and how it went down.

It’s one of those stories that changes with every telling and there must be 1,000 versions.

Recently the story got another spin when Niall Boland from Ballymore Eustace bumped into Ronnie Wood in central London.

Improbable as it sounds, the Rolling Stone was referred to by his christian name, the famed barring recounted and an amenable Wood listened attentively before laughing at a punchline that pitched the world famous rock band onto Naas Main Street.

Wood then wished the listening gallery well, made his excuses, and headed off.

With the warm aftertaste of the story settling, someone stood forward and said to the storyteller: “You do know that was Rod Stewart don’t you?!”

This new add-on was recounted with much hilarity at a Kildare London night recently, along with different versions of the original
barring story.

The most popular version pitches Tommy on a collision course with Kildare resident Wood and his bandmates for flouting the pub’s no singing rule.

According to legend, shocked punters waved failed appeals during a surreal exchange:

To which the proprietor is reported to have replied: “I don’t care if it’s Daniel O’Donnell himself, there’s no singing!”

And I’m sure there’s a version out there featuring both Wood and Mick Jagger.

The only true constant to this story is its ready and often telling.

I’ve done it myself many times. I mean, it’s impossible to pass the place and not share the story with someone from out of town.

And now I’ve cause to wonder just how far the reach of this story extends because in recent days a friend from Brixton, Sam Shaughnessy, walked into Fletcher’s when visiting relatives in Naas.

Within hours the text I expected landed.

“Did you know about this place and the Rolling Stones?!” it read.

This spike in interest encouraged me to get to the bottom of the story so I called Fletcher’s one evening after nine, told Tommy about the Ronnie Wood-Rod Stewart mix-up [both skinny with long, spiky hair] and asked what really happened?

Slightly bemused, Tommy explained that there was no Stewart or Jagger, nor any reference to Daniel O’Donnell but Ronnie Wood was there certainly.

“It must be over 20 years ago ... and you can add a bit more onto that too probably,” he said. “Ron Wood was there alright, there was a few in with him but, no, David Bowie wasn’t there,” he laughed.

He then succinctly recalled that when Wood started playing music he simply came from behind the bar to tell them all to stop. Yes he knew who they were. And, no, he didn’t kick them out.

“I think they stayed on for a while, as I remember,” he said, declining to volunteer any further details other than: “You’d be surprised how often I’m asked about it; asked if I really barred the Rolling Stones?”

FOOTNOTE: After this column was published in the Leader on February 2, 2016,  we received the following email from Gus Fitzpatrick from Kerdiffstown, Naas casting further light on the town's most famous anecdote...

"Eric Clapton owned the Barberstown Castle Hotel at Barberstown Cross, Straffan for a number of years in the Seventies. in my capacity of md of the meat factory in Sallins I used Barberstown for entertaining customers and staff.

"Eric and his entourage, including his manager Roger Forrester, visited on a regular basis. As an aside Eric loved to fish both the canal and the Liffey as no one bothered him.

"Ron and Eric were very good friends. On a visit to Ireland Ron brought Eric into Fletchers one early evening. There was just one customer, an oldish man sipping his pint when the boys arrived.

"Ron and Eric were chatting about chords on the guitar and Ron told Eric that he thought that he had found a new one. Out to the car and two guitars were brought back to Fletchers. They were strumming away. Tommy had stepped out. When Tommy came back he heard the "noise" and informed the two boys, nicely, that he didn't allow anything "like that in here". The boys put away their instruments and ordered another drink. To the best of my knowledge, Eric was 'dry' at the time.

"The boys laughed, quietly, and Tommy disappeared again. The old man, the only other customer, came over to the two boys. He hadn't a clue who they were and said, ''don't mind Tommy lads for if it was Daniel O'Donnell himself he wouldn't let him sing.''

"In the late Eighties I was driving down the M1 from Birmingham to London listening to BBC radio and Ron Wood was being interviewed. He told the interviewer that he lived mostly in Ireland. He went on to recall the story of the bar owner and Eric and himself. My story is not quite verbatim but its near enough. You hit the crossbar with your details."