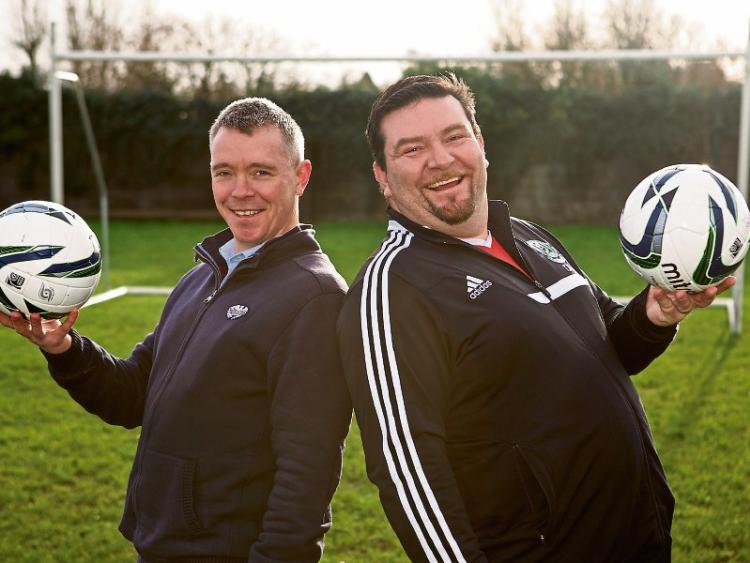 Dave Donegan of Lakelands and Tommy Deans from Esmondale, two standout players on the greens back in the day. Photo: Tony Keane

The Inter-estate football league was a feature of the Naas sporting landscape in the 1980s. The whole thing was largely unstructured but very simple – the best team in one estate against the best from another.

There were no age groupings and, generally speaking, no jerseys.

In London on Kildare nights out we often talk about stand-out players from this time such as Mick Power from Elmwood, Kevin
Harrington from Roselawn and Joe Bracken from down the canal as well as teams like Ballycane and Lakelands.

The talent pool was certainly as good as any provincial town anywhere in the country but coaching was non-existent and the organisation of fixtures was down to us the players and Johnny Dwyer, one of the few adults to show respect for the
contests by getting involved as a referee.

A league format took a bit of organising so it was much easier to fall back on derbies.

Woodlands versus The Paddocks.

These meetings were tribal, littered with stray tackles and played out against the backdrop of an English First Division
featuring players like Brian McClair, Mark Hughes, Kenny Dalglish, Ian Rush and Niall Quinn at the Arsenal.

For local inspiration read Barry Daly from The Paddocks, Dave Donegan from Lakelands, Declan Lackey, and the Giblins in
addition to those mentioned at the top.

Dave Donegan, like Tommy Deans from Esmondale, also lined out in the Dublin league with Peamount. He could play with both feet, in any position and pull off a bicycle kick a la Hugo Sanchez.

I was certain then he was destined for the same arenas as the Mexican.

Sanchez was with Real Madrid then and it was fitting when two estates joined to make their own version of the ‘Galacticos’.

They went by the name of Ashwood and represented a coming together of Ashgrove and Woodlands estates. Like their Spanish brothers, their ambition saw them suck up the best talent from beyond the borders of their estates. This is something that can still rankle more than 25 years on!

Around this time, the Capri Grill on Poplar Square got paid a visit by relations from southern Italy.

Their staff would be salting chips behind the counter and talking about Cousin Tony, a footballer, then in his mid-teens.

One summer’s evening Tony Izzi cycled into north versus south game in Lakelands and asked could he join in.

Over the space of an hour he executed every possible play with more pace, power and accuracy than anything seen in any inter-estate game anywhere in the town – ever.

Diving headers with hang time! Curling the ball around the wall with the outside of his boot! The lot!

There were some class players on the pitch that evening, like Liam Grogan, Liam Brennan, Davy Byrne and Keith Silke but it felt like Tony Cascarino not Tony Izzi had just turned up.

The sudden realisation that there were better players out there than those togging out week to week in Naas estates was a seismic moment.

That Tony Izzi was the only player from this generation to forge a career out of playing football is something I wouldn’t have believed had I been told back then.

For years after he did what he did on the pitch on that late summer evening in Lakelands in the colours of Cobh Ramblers.

Even now, his name pops up on League of Ireland soccer forums.

And while we talk about his arrival now and again in London, our nostalgic bias is for the home grown, our peers from the 80s, the talent nurtured on pitches like the Dip in Woodlands and out the Caragh Road.

Some emerged from all this unstructured energy to one day form Kingstown or play in adult leagues with Naas.

Oh for some of the coaching Cousin Tony got.