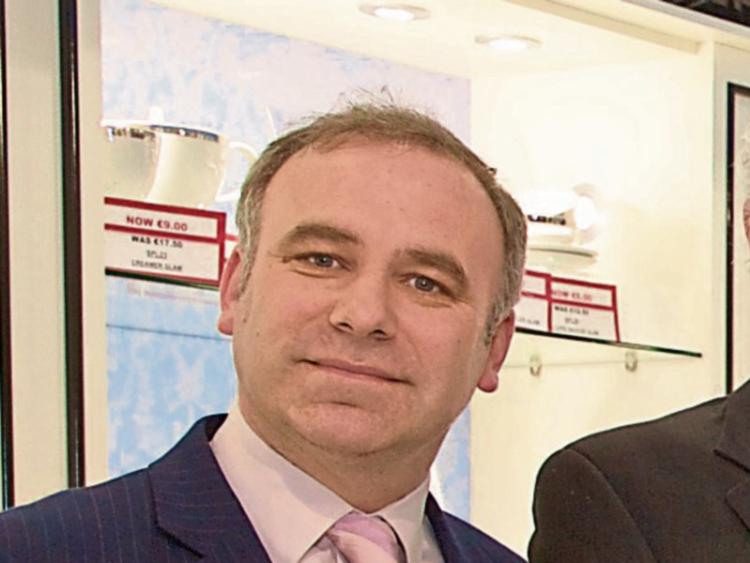 There’s no fear of the Mayor of the Kildare Newbridge Municipal District being mistaken for a common or garden citizen at ribbon cuttings from now on.

Local councillors voted last week that the mayoral neck, which has been naked of official jewellery since Newbridge Town Council was abolished under the 2014 electoral reforms, shall henceforth be adorned with the old Council chain.

Councillors decided, in the first flush of post-electoral spring-cleaning, not to use any chain of office for the District chairperson, though he or she would adopt the title of Mayor. They also voted to cut the Mayoral allowance — the extra money paid to the title holder — by €3,000 to €9,000.

Cllr Murty Aspell, backing the proposal, went one further and said the old chain should be put away for safekeeping and a new one commissioned. “Could we get one sponsored?” he asked, as the meeting heard from council officials present that a new chain might cost up to €2,500.

Cllr Joanne Pender added that she wasn’t a fan of a chain-wearing mayor and Cllr Sean Power said he would hate to have to wear a chain.

On the issue of the allowance bump, Cllr Mark Lynch said reinstating the extra €3,000 “would send out the wrong message and would be disrespectful to those who voted for us”.

Cllr Pender agreed, saying that €1,000 a month to chair a meeting is exorbitant.” She was swiftly corrected by Cllrs Aspell and Kennedy, who indicated the role was much more involved.

Cllr Suzanne Doyle, who had the casting vote to reduce the allowance in 2014, said she “should have had more courage at the time”, but did not want to be seen to be acting in her own interests as she was then in the Mayoral role. She said Kildare-Newbridge should be treated with “parity of esteem” with the other districts — Naas pays its Mayor the full €12,000.

Both matters were put to a vote. Cllrs Lynch, Stafford, Kennedy and Aspell voted to use the Newbridge Town Council chain, with Pender, Doyle and Power voting against (Fiona McLoughlin-Healy and Morgan McCabe were absent).

On the matter of reinstating the full allowance, Cllrs Doyle, Stafford, Kennedy and Aspell voted in favour with Lynch, Pender and Power against. Both proposals were carried.

Meanwhile, Fine Gael’s Cllr Mark Stafford was voted in as this year’s Mayor as Cllr Paddy Kennedy stepped down at the end of his term. Cllr Power (FF) will be Deputy Mayor. Cllr Kennedy, who has said he will retire at the 2019 elections, paid tribute to all who had helped him in his role, especially Cllr Stafford who deputised for him on several occasions during a recent bout of ill-health.