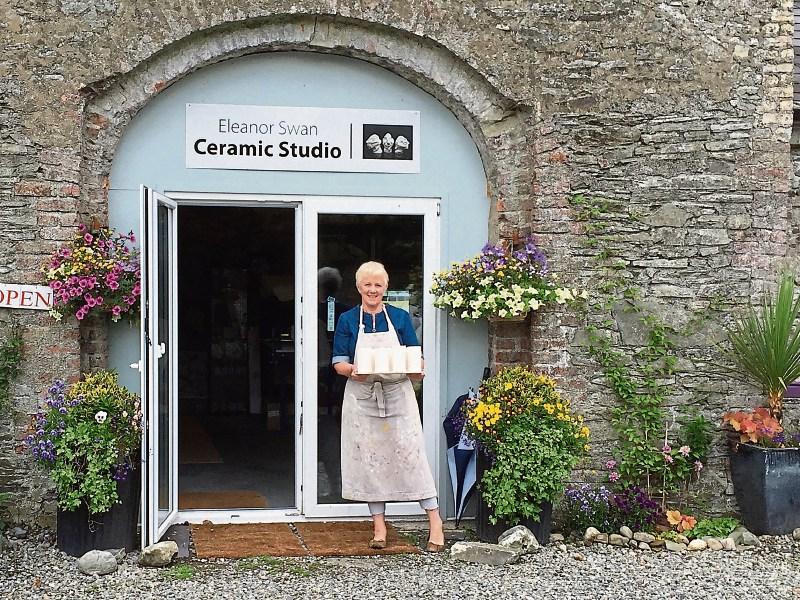 Eleanor Swan outside her studio in 'The Forge Yard', Russborough House

Eight years after packing in her 25-year nursing career for a new life as an artist, Newbridge native Eleanor Swan is to be honoured with a prestigious international award in Taiwan.

Having initially applied last year, the Russborough House based artist successfully negotiated various judging phases and was stunned to learn her piece 'Ode To A Not Too Distant Past' had been accepted for the Taiwan Ceramics Biennale.

Bestowed a bronze medal, Eleanor is getting ready to jet off to China to receive her prize at the opening ceremony on July 22 in Taiwan.

“I was speechless. I could not believe it. It’s probably the biggest thing I have done and it opens up other opportunities,” she said.

The mum of three grown up children, who hails from Great Connell is married to Sean Dunne. Her family are super proud of her achievements.

Eleanor went to school at the Holy Family Secondary School and then progressed to train as a nurse at the School of Nursing at the Mater Hospital.

“I worked in the operating theatre at Temple Street Hospital and it was great, but art college was always at the back of my mind,” she explains.

“When I left school in the 70s, I wanted to go to art college, but there wasn’t as many opportunities for artists as there are today, so I went on to do nursing instead and I really enjoyed it.”

However, in 2002 Eleanor decided to apply to the National College of Art and Design (NCAD).

Clearly impressed with her potential, Eleanor was accepted and graduated in 2006 with first class honours. She went on to complete an MA in Ceramics at NCAD.

“It was hard work, but it wasn’t a struggle if you don’t mind putting in the work,” she said.

Eleanor’s workshop is based at Russborough House in Co Wicklow.

“I operate from there. That’s been great as well. You go in in the morning, do your day’s work, and go home in the evening. It gives you structure and I like having structure,” she said.

The future looks bright for this local artist and she had applied for several high profile projects, exhibitions and opportunities.

Her award winning piece will be permanently displayed over in Taiwan.

The official opening of the Taiwan Ceramics Biennale is July 22 at the New Taipei City Yingge Ceramic Museum. After Eleanor recieves her medal, she will present a paper on her work at a special conference.

The following day, July 23, there will there will be an opening of an exhibition at the 77OMG Culture Centre in Taipei and Eleanor will have a piece “Inscape” in the exhibition.

Eleanor’s work can be viewed at her website www.eleanorswan.com which shows the range and depth of her ceramic work and paintings.