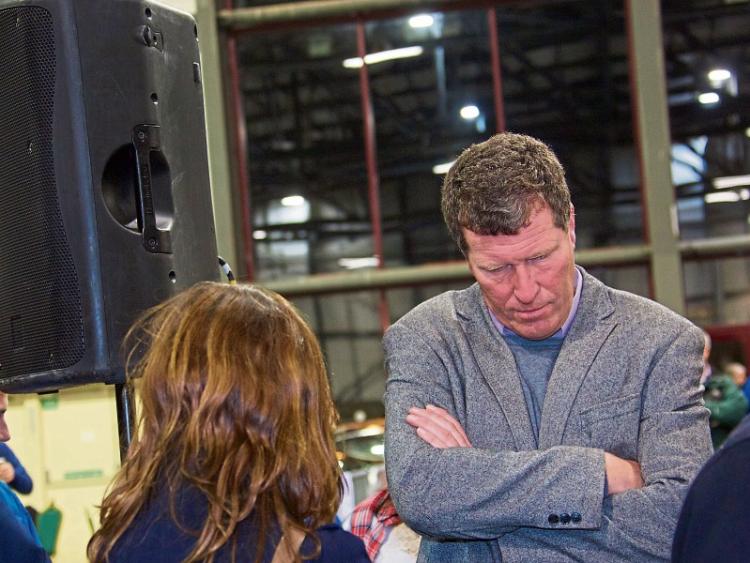 Punchestown’s event centre is a hangar-like, square shaped, concrete-floored prairie which is much more functional than aesthetic.

Illuminated by a combination of spotlights and fluorescent lighting, it’s 60,278 square feet offers plenty of room for an election count and nowhere to hide for defeated candidates.

Long, long before a pedestrian count yielded an official result it was apparent that all had changed utterly.

Many of the 49,226 people who bothered to vote had turned to two rookies.

They regained the party’s supremacy which evaporated in the last election when both the late Michael Fitzpatrick and Aine Brady were ousted.

The more things change they more they remain the same.

In 2011, Fitzpatrick and Brady where shown the door for FF’s economic policies which brought economic collapse and hardship.

Now Lawless and O’Rourke were embraced by an electorate tired of the hardship caused by a FG/Labour administration trying to remedy the collapse.

The two casualties of this election were veteran TD Emmet Stagg (Lab) and Anthony Lawlor (FG).

Stagg got less than half a quota.

He had no running mate whose votes would prop him up and there weren’t enough like-minded candidates in the field from whom he could win transfers.

Lawlor was elected for the first time in 2011, in part due to a poll-topping performance by Bernard Durkan (70), now the old man of Kildare North in Dail Eireann.

With 6,100 first preferences this time, Durkan was just about able to hold on to his own seat, never mind a cast a lifebouy in anybody’s direction. Lawlor’s woes worsened when poll toping Catherine Murphy’s surplus of was doled out. Social Democrat Murphy was the only TD elected with a quota and she was the star turn of this contest.

Stagg was the main beneficiary of her transfers – ironic given the strained relations between the pair in the past when Murphy was seen as more of a left-wing politician. Lawlor got 84 of her transfers with O’Rourke getting 145.

It wasn’t a massive difference but it kept O’Rourke in pole position for the last seat which was always going to be between him and Lawlor.

The elimination of the three poorest performers - no-hoper independents Michael Beirne, Ger Dunne and Elizabeth O’Sullivan – who couldn’t muster a decent vote between them, followed. At least this brought some small consolation to Lawlor insofar as he garnered more transfers (12) but he was still nearly 1,000 votes behind.

Next out was Anti Austerity representative Ashling Merriman, best known for her vocal presence as anti water charges demos in Naas.

It was to be final count last Saturday night and brought slightly more good news to O’Rourke.

Unsurprisingly the majority of Merriman’s transfers went to Sinn Fein’s Reada Cronin, who polled well enough but still fared worse than her Kildare South counterpart – even though Cronin had the benefit of a profile as a member of Kildare County Council.

Renua’s Shane Fitzgerald got less than 1,000 first preferences and was next to exit. Again O’Rourke picked up a little more support. By 10.30am on Sunday O’Rourke was almost 1,000 votes ahead of Lawlor.

O’Rourke got an unexpected boost in the sixth count, taking 168 transfers from the left wing candidate Celbridge Brendan Young who advertised his philosophy by wearing a black t-shirt bearing the legend “I Still Hate Thatcher”.

Green runner Maebh Ní Fhalluin made her exit and her votes were distributed fairly evenly, with most going to Stagg.

The elimination of Reada Cronin on Sunday afternoon was the first upset of sorts, even if it’d been flagged.

And when her votes were sprinkled about O’Rourke’s lead over Lawlor had extended to 1,400.

The final count got underway at 3.15pm when Emmet Stagg, who had never lost an electoral contest since taking a Dail seat in 1987, was eliminated. It left Labour without a TD in either Kildare constituency and Lawlor needing many more of Stagg’s papers than he was ever likely to gather.