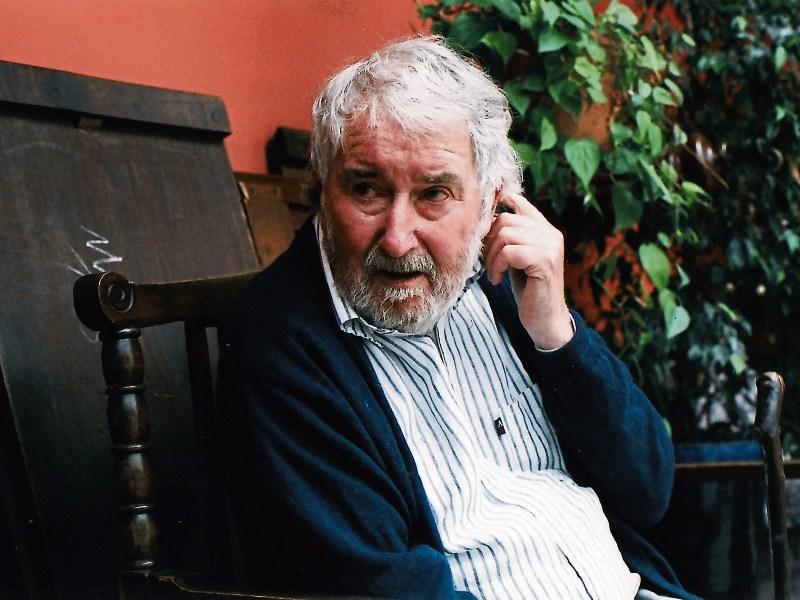 A member of Aosdana, he lived in Kinsale, Co Cork since 1986.

Born in Celbridge in 1927, his family lived at Springfield House on the Clane Rd. He attended Clongowes Wood College before working at an advertising agency in Dublin.

He moved to London in the mid 1950’s and then travelled in Spain, South Africa, Germany and Rhodesia.

His best known novel, Langrishe Go Down, was published in 1966 and was about four sisters living in a big house – which was Springfield House in Celbridge.

It won a number of awards and was was made into a BBC series, with Judi Dench and Jeremy Irons in lead roles.

His three-part autobiography, A Bestiary, apart from being a great book for the general reader, contains much for those interest in the Kildare locality.

His own family, a Roman Catholic one, Springfield House and Celbridge loom large in his works. His family came from wealthy background but money ran out and his books describe the mismanagement of the estate attached to Celbridge.

He is survived by his wife Alannah Hopkins, a writer, Higher Street, Kinsale and children, Carl, Julien and Elwin. Sadly missed by his loving wife, family, grandchildren and many friends.

His farewell Service took place at The Island Crematorium, Ringaskiddy on Wednesday, December 30.

A Kildare-based writer, Neil Donnelly, has been working on a documentary film on his life. The author of the 1981 play, “Silver Dollars Boys,” said this week he needs to find funding to complete his project.

Some scenes for the documentary, “Aidan Higgins – Prose Poet,” have already been shot at Springfield House, now an impressive bed and breakfast.

Neil organised the Aidan Higgins festival in 2007 to celebrate Aidan’s 80th birthday in north Kildare in 2007.

Well known US writer, Annie Proulx, a fan of his writing, honoured him with her presence in Celbridge Abbey for his 80th party.

The best known work of the Celbridge author is “Langrishe Go Down.”

That was published in 1966 and won the James Tait Black Memorial Prize in 1967.

Langrishe was the name of a real family which lived in Springfield in the 19th century.

Some accounts of his work say that the sisters of the book, were really Aidan Higgins and his brothers.

Others say that should be taken with a grain of salt.

Another book, Balcony of Europe (1972), was shortlisted for the Booker Prize.

He said himself that he was unhappy with it and some of the translations.

Many believe Higgins has been unjustly neglected, including John Banville.

In an article in May 2007 in the Irish Times, Fintan O’Toole, had very high praise for Langrishe Go Down.

He quoted the story of the book at the Franfort Book Fair of 1972 when the Italian publisher, Giangiacomo Feltrinelli, who had truned Dr Zhivago and The Leopard into huge commercial and literary success, described how he had sat up all night reading the “marvellous novel”.

Beckett helped Higgins financially and advised him: “despair young and never look back.”

Calder sold the rights to Langrishe Go Down to nearly all major European countries.

Aidan Higgins attended Clongowes, where, he was very good at art and English but very very bad at maths, as he told the Leader in an interview

He never attended a university but was very well read.

In the early 2000s, he received an honorary degree from UCC.

A compilation of his book reviews, Windy Arbours, was published in 2006.

The lines are blurred.

Truth telling was a key aspect of his work

Making the documentary was not an easy task.

When discussing the matter initially, he told Higgins: “If you don’t like it you can shoot me.” Higgins responded: “Where would you like the bullet.”

Many of his book are published by the Dalkey Archive Press.

It said this week that it is working with the late author’s agent to publish one final collection of his criticism.

It also plans to republish one book, Helsingor Station.

Aidan Higgins travelled a lot throughout his life but his books are rooted in Ireland.

In the 2008 interview with the Leinster Leader, Aidan told how, after reading a Higgins short story, Asylum, Beckett gave him the following advice: “Write on, only for yourself and for nobody else.”