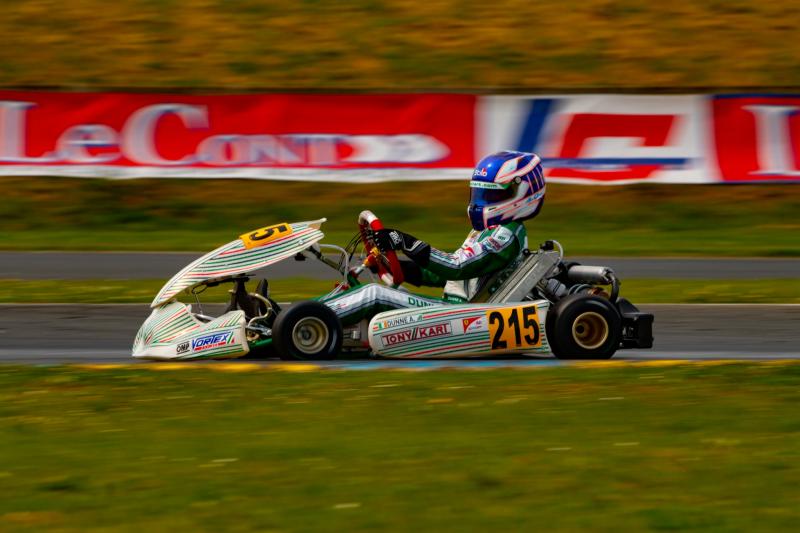 Teenage karting sensation, Alex Dunne, continued to impress as he tackled round two of the European OK Junior Championship in Genk, Belgium, over the weekend of May 17-19.

The Newbridge College student put together his strongest weekend yet, taking three wins from five heats before fighting his way to second in the final, to move to third in the championship standings as the series reaches its halfway mark.

Racing at the Belgian track for the first time, Dunne was in contention from the start as he took fifth place in qualifying, from a field of over ninety drivers, to ensure he would start from the front row of the grid in all of his heats. A flying start to his first heat saw Alex move into the lead on lap one and then hold on to take a lights to flag victory.

At the start of heat two, Dunne dropped back to fourth, but he soon reasserted himself and was back in the lead by half distance, from where he took a comfortable second victory. Heat three was one of the toughest for the Clonbullogue resident and having led initially he got bumped back down the order to third. Another determined performance saw him fight back to second but he ran out of time in the short nine lap heat and had to settle for the runner-up spot.

The fourth heat once again saw Alex get away in the lead group and he gradually picked up places, moving into second spot in the closing laps. Light rain began to fall with two laps to go making conditions very tricky for the drivers, who were all on slick tyres. Alex had settled for getting safely home in second but a downpour during the final lap caught out the leader and most of the rest of the field, as Alex used all of his skill to keep his Kart on track and survived to take his third heat win of the day.

Going into Sunday's final heat Alex knew that a top six finish would be enough to get a front row start for the final. With many of his rivals pushing hard for final places, the 13-year-old drove a mature race, allowing his rivals to battle for the win while he picked up fifth to secure second on the grid for the final.

Having had an excellent set-up on his Tony Kart throughout the heats Alex went into the extended, 19-lap final, full of confidence. A superb start saw the Irish driver sitting second for the first four laps before he made his move for the lead.

Taking over at the front at the beginning of lap five, Alex then pulled out a comfortable advantage which he maintained for much of the race. As the laps counted down however Alex's Kart set up, which had worked so well all weekend, left him unable to maintain his pace for the longer race distance and he lost the lead with just two laps to go.

At the flag, the youngster was obviously disappointed at missing out on his first European Championship win but was still very happy with his weekend. “I have to thank my team for giving me such a great Kart all weekend,” said Alex after the final.

“The set up we had enabled me to take three heat wins and my best ever starting position for a final. I know now that working with the Tony Kart team my first win is not far away. We are in a great position in the championship now, so we'll move on to the next round in Sweden and hopefully go one better and take the win.”

The next European Karting championship outing for Alex Dunne is in Kristianstad, Sweden, from May 30 to June 2.