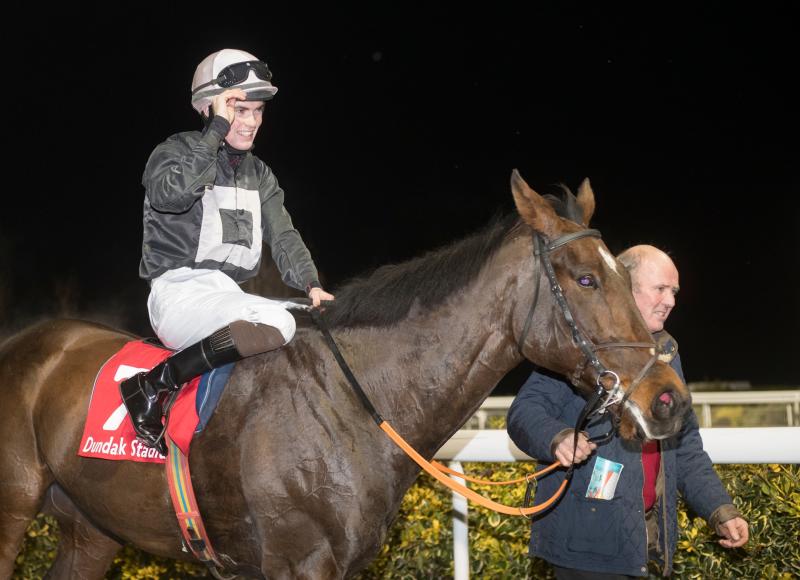 Tom “Socks” Madden is on an upward trajectory in the flat racing sphere. The former Naas CBS student now has a few seasons of race riding experience under his belt and with it the knowledge required to hold his own in big runner fields so often seen at the Galway Festival.

“I’m riding a few years now so I have some idea of what’s going to happen, most days there’s going to be big fields in Galway which means there’s less chance of getting a bit of room. You just have to fight your corner, try to hold your position and hope it all works out”.

The 20-year-old currently rides out four mornings a week at Jessica Harrington’s Kildare base while a further two are spent with Johnny Murtagh on the Curragh. Such access allows him to learn from the best, although it could be argued that doing so is nothing new to the young protégé.

Tom’s mother Trish hails from the Taaffe racing dynasty while his father Niall “Boots” Madden was a multiple Cheltenham festival winning rider who now earns his crust in the training sphere.

His brother Niall “Slippers” Madden boasts an impressive racing CV that includes victory in 2005 renewal of the Galway Hurdle and the 2006 running of the Aintree Grand National. Growing up in a house of such racing tradition brought with it the opportunity to benefit from some in-house tutelage.

“I’m lucky enough that Dad rode a good bit and my brother Niall is a jockey too so I got schooled very early on. They coached me a lot when I was younger”, he acknowledges.

While Madden remains unsure of his specific mounts ahead of this year’s Galway Festival, he’s very clear as to his wish list for the week ahead, “you’d be hoping you have a few rides with good chances; it would be nice to have a ride in a few of the races with good pots”, he says.

One horse which is likely to represent the Madden clan is Shake The Bucket. The 11-year-old veteran is trained under the guise of “Boots” and was a conqueror of Ballybrit in 2016 when winning the Easy Fix Handicap Hurdle. He is dubbed “a little legend” by “Socks” who adds, “I think Dad has a race for him so hopefully he can go and do what he did last year.”

A Shake The Bucket victory would represent a very special triumph indeed such is his lifelong association with the family.  “We bred him, we have him all his life and he’s able to win a race”, Tom explains with obvious pride. Regardless of the result in Galway however, the stature in which Shake The Bucket is held among those closest to him is not likely to wane.

When questioned as to what is required of a horse at Galway, Madden states,  “it is very undulating and takes a good bit of getting so you really need a good horse to get you to that line in front. If you turn in front on a horse that stays, you have some chance.”  Yet depending on the temperament of your partner, hitting the front turning in can prove detrimental in the quest for glory, “the horse could be pricking it’s two ears and be looking to the stands so it’s a bit of a catch 22”, he explains.

His current seasonal tally of winners places him firmly to the forefront of the Apprentice Championship but he insists that emulating the likes of Joseph O’Brien by taking the crown is not a priority for him.

“I try not to think about it too much, if it happens happy days but I’m just trying to keep riding away and the more winners I can get the better. If it happens great but if it doesn’t I won’t get too down about it. It’s nice to be bang there so hopefully I can keep it lit now”

The battle to control one’s body weight is often a gruelling reality of life in the saddle but for now at least Madden’s weight remains in check, “I’m lucky enough as I’m towards the bottom end of the weights which leaves me open to a lot of rides”, he acknowledges.

That may change with the passing of time of course and if it does “Socks” will be ready to adapt. “I have a licence to ride over hurdles so I might do that over the winter just on a few good ones for Dad just to see if I like it.”

With the winter months apparently accounted for, Madden will be blinkered in his pursuit of winners on the level between now and the end of the season. Any other accolades that may fall his way will come as a welcome bonus.

A winner at Galway would be most welcome indeed.