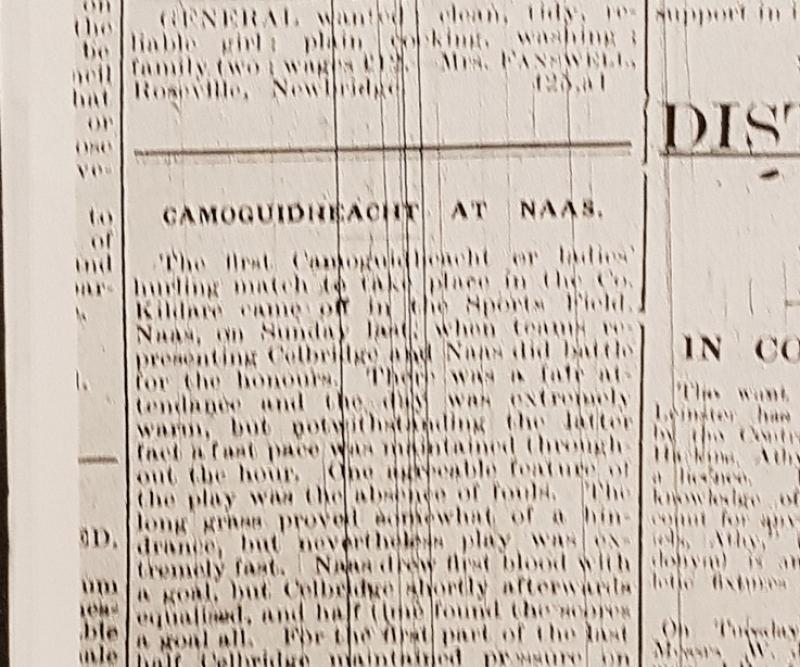 The first Camoguidheacht or ladies’ hurling match to take place in the Co Kildare, came off in the Sports Field, Naas, on Sunday last, when teams representing Celbridge and Naas did battle for the honours, the Leinster Leader reported on June 8, 1918.

There was a fair attendance and the day was extremely warm, but notwithstanding the latter fact a fast pace was maintained throughout the hour.

One agreeable feature of the play was the absence of fouls. The long grass proved somewhat of a hindrance, but nevertheless play was extremely fast.

Naas drew first blood with a goal, but Celbridge shortly afterwards equalised, and half time found the scores a goal all.

For the first part of the last half Celbridge maintained pressure on the Naas posts and soon took the lead with a goal.
The Naas ladies retaliated later and succeeded, after some hard work, in equalising.

They were again attacking when the full whistle went leaving the game a drawn one at two goals each.

We must congratulate the ladies of both teams upon the really splendid display they gave of the National pastime.

As this the first match which these recently formed teams have played, they are deserving of the highest praise.

The following are the names of the players: