JB Murphy is a promising cyclist in several codes 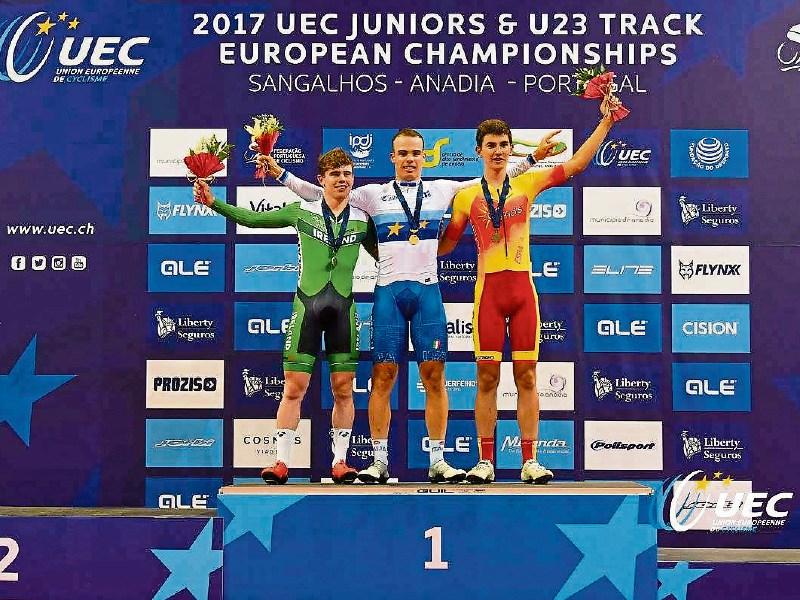 JB Murphy, on the left following his silver medal win.

A student of Newbridge’s PBS, Athgarvan man JB Murphy, has won a silver medal at the European Track Championships despite never having race on a velodrome (an indoor wooden cycling track) before.

It’s reported he first trained in a velodrome four weeks ago and last night in Portugal he won a silver medal the junior men’s elimination race in Portugal.

Murphy, who also competes at a high level on the road and in cyclo-cross (around cross-country paths) was only bested by Italian Michele Gazzoli.

The elimination race involves a series of sprints every few laps of the track. The last cyclist in each race is eliminated until there are only two left.

“When I pulled my number out of the hat I was towards the back of the bunch,” the Kilcullen Cycling Club man told Stickybottle.com. “So my coach David [Muntaner] said to sprint to the front. And I sat there for the race.

“I sat at the front and rode as fast as I could – and next thing all the big nations went out.

“I am not even sure what happened in the race, because I sat at the front the whole time.

“When I looked back there were six riders left, then four and then three – myself, the Italian and the Great Britain rider. Myself and the Italian went shoulder to shoulder and GB was eliminated.”

In scenes reminiscent of the success of Caroline Ryan some years ago, reports from the cycling press suggest the relatively unknown Kildare man stunned the cycling world with his success.

And on the road, he was triumphant in the Gorey Three Day. He is also part of the Irish Road Team which competes in Europe.

We’ll hopefully get a chance to chat to him later.