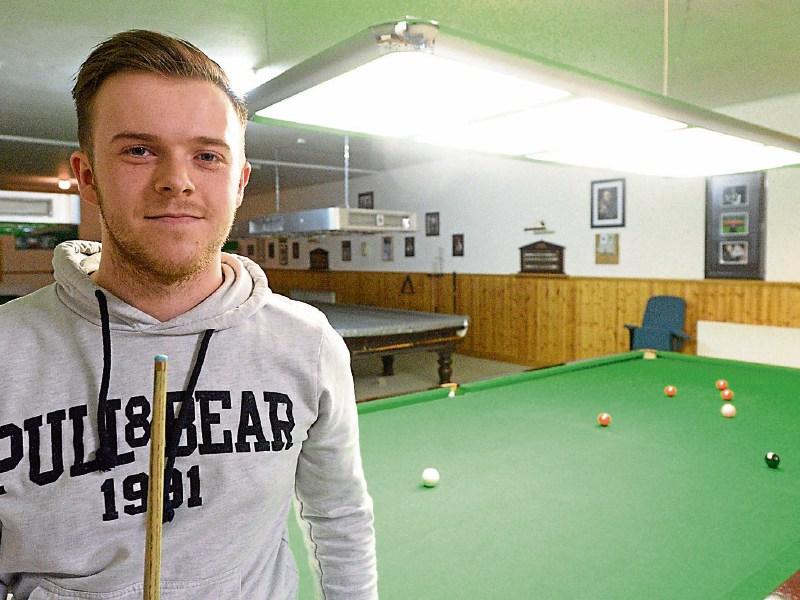 He is still in his first season as a full time snooker professional but Sallins native, Josh Boileau, who plays out of Newbridge CYMS Snooker Club, is certainly making progress.

Only last week he made it  to the third round of the Coral Wales Open Championship, along the way defeating World No. 6 Shaun Murphy.

“Yes, without a doubt, my biggest win to date,” Josh told the Leinster Leader last week during a lunch break in his eight hour a day, every day, practice routine.

Did that big showing in the Coral Wales Open come as a surprise or did he  feel it was an improvement waiting to happen?

“Not really a surprise in fairness” replied Josh, adding“I have been upping my practice and  felt I was playing  well; was just a case of bringing it to the table, so no, I wasn’t really surprised, but definitely delighted.”

Currently the European U21 snooker champion, which he won in Poland this time last year, Josh admits that while he is reasonably satisfied with the way his initial season has gone to date, he says “it looks a bit worse, from a rankings point of view, than it is in reality but I have had a few very close defeats, closing frames and that sort of thing and if even a couple of them had gone my way I would now be having a brilliant season, but I know it is in me and hopefully before the end of this season, and into next season, I can bring that to the table.”

Apart from the obvious what does he think needs to change to turn those close defeats into victories?

“Really just a bit of luck; one ball in one frame can change an entire match; I know I'm close and getting closer but I just need that little bit of luck really.”

And was getting the better of Shaun Murphy in Wales a major boost?

“Oh yes, without a doubt; he is one of the top players in the world and has been now for over a decade;  even just to play him was a great experience and of course beating him was a great confidence booster,” quipps the 22-year old.

On a week that he is not in competition and has no (practice) game arranged Josh spends most of the day on the snooker table.

“ I am on the table from 9 to 5 these days and while I was putting the hours in before, I was probably taking too many breaks but now I am trying to treat it more like a job, eight hours a day; just taking a daily lunch break.

“The majority of the week I am playing by myself, there are only three professionals in Ireland; Fergal O’Brien is in Celbridge and I would play him maybe twice or three times a month; and of course young Charlie Sweeney, also a member of Newbridge CYMS, and he gives me a game once a week, but I would be practicing minimum of three days every week on my own here in Newbridge, apart from when I head  to Celbridge to play Fergal.”

Nearly one year in the pro ranks what does he find is the big difference between playing amateur and professional?

“ I was just saying to one of the lads the other day, you get used to winning matches as one of the top amateurs but that changes when you turn pro;  even when you win your games now it doesn’t feel the same because in the amateur game you could be playing five or  six games a day finishing the tournament the same  day but in the pro  game you are  playing one game daily which feels totally different and takes a bit of getting used to but, hopefully, as more wins come it will feel more normal.”

You have been so used to winning when an amateur and then all of a sudden you are playing against top players and the wins are not as frequent, which must take a bit of adjustment?

“Well, that’s exactly it; you have to win, if you lose you are gone home and you could be gone for three or four weeks before your next tournament, while at home (amateur) you would probably have a competition every weekend, but the schedule is totally different in the professional game where you might have one tournament in a month or you could have four in a month and it is just getting accustomed and planning around that.”

So where to next?

How is he managing in that regard.

“Well with the money I have made, here and there, it is just about keeping me going; the club (Newbridge CYMS) is helping me out and a few guys that I know have been helping me also and while I was struggling at the start of the season, I have got more from the bigger prize funds recently and that has taken the pressure off.”

But you would be open to a main sponsor coming in and backing you?

“Absolutely, and while the small (sponsorship) ones are a big help; if you had one sponsor to cover the season it would be a big weight lifted off the shoulders; then all you are doing is  concentrating on  your snooker.”

What kind of money would you need to cover the entire season?

“Living in Ireland a minimum of €15,000; if you were based in England you could get by with less because a lot of the qualifiers are held in England; so flying expenses; accommodation etc so hopefully someone will come in to help out, in the meantime I will be doing my utmost on the green baize.”

And so say all of us!