At last, a ray of sunshine breaks out in the Derry air 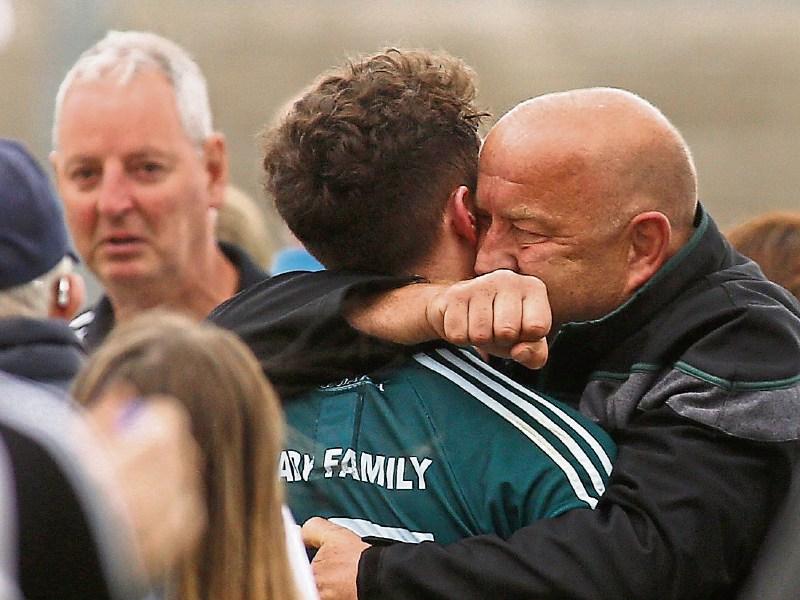 Fans show their delight after final whistle, while an emotional Camillus Walsh looks on

We saw something from Kildare on Saturday that we have not seen for some time.

We saw aggression. We saw passion. We saw intensity. We saw belief. We saw honesty. And indeed we saw a dollop of cynicism. Yes cynicism. Something not associated with Kildare teams by any stretch of the imagination.

The aggression was evident from the word go when Fergal Conway got stuck into his marker (legitimately)  putting down a stern warning that he, or his team mates, were not going to be bullied in this one, unlike what happened in Tullamore.

Conway, along with Liam McGoldrick got a yellow but the warning had gone out early and it was very encouraging.

When you here the home fans complaining about Kildare's tactics you realise you are doing something right. This, after all, is Derry we are talking about; not renowned for a county that stands on ceremony, either on or off the field of play, down the years.

The passion was there in abundance and epitomised by the display of Tommy Moolick who gave it absolutely everything getting up and down the field. I can't think of a more honest player that ever pulled  a white (or green) shirt over his head than the Leixlip man.

The intensity that was so lacking in Tullamore was very evident in Owenbeg as shown by the fact that no less that a dozen players in green shirts  got on the Kildare score sheet; while selector Roli Sweeney was fairly  animated on the line, seen  chatting (for the want of a better word) to match officials throughout the entire game.

The belief was there in abundance as on both occasions that Derry penetrated the Kildare defence in the first half to raise green flags, The Lilies hit back instantly with points; no dropping heads; no sulking; no doubts; just got on with it.

Then there was the honesty.

Honesty knowing that what happened in Tullamore was not good enough and had to be rectified.

There was honesty from the management who insisted they had to look at their performances, both individually and collectively. There was an honesty in the players who were more than aware that the county was at a low ebb; probably as low an ebb as any of us can remember and that is saying something, but they (the players) collectively are the only ones that can lift the county. And that they did.

The cynicism, well, when it was needed it was there.

It's called taking one for the team and we saw it on the double. The first when Eoin Doyle took down Emmet Bradley as he was bearing down on goal and the second when the same Derry player was in a similar situation in the second half this time David Hyland did what needed to be done.

It may not be pretty but needs sometimes dictate.

You can argue if a black card is enough of a punishment for such offences but considering that you can do exactly the same in hurling and it is only a yellow card offence,  no doubt, we will see a lot more as the summer unfolds.

It's a long, long drive to Owenbeg, you are speaking in numbers something similar to how many days it was since Kildare last recorded a win, and that was back in June of 2017 when they defeated Meath in the Leinster semi final. But still the real followers were there. The followers that come hell or high water will always be there. And they were much appreciated by Cian O'Neill, his management team and especially by the players.

I witnessed four players in a row shaking hands with supporters and each of those players said “and thank you for travelling up, your support means a lot to all of us.” A very nice touch I have to say.

Selector Enda Murphy said after the game that while he was delighted for the players he was also delighted for Cian O'Neill who he said “had prepared the team as well as any team I have been associated with down the years.”

The victory of course,  does not guarantee anything but another game in Round 2 of the Qualifiers but as manager O'Neill said after the game “it is a step in the right direction” reminding one and all if that win had not been achieved, there would not even be a step.

Are Kildare now suddenly back at the level we thought we were at and where we expect to be  at?

While it was great to win; great to score an impressive 2-22 and show lots of guts, courage and intensity, there are still cracks there that need some filling.

The defence was opened up way too many times throughout the game. Against a better set of forwards Kildare will pay the price if those mistakes are repeated.

The Lilies, on a few occasions, one could argue, got the rub of the green from the match official, probably another first; if not a first then certainly something that can't be said on a regular basis.

The display of James Murray in this his first game at senior championship level. He looked as if he had been playing with this team for ages. He still has a few edges that needs some smoothing but overall he can be more than happy with his display.

Fergal Conway was a revelation, especially in the opening half. He used his strength and his aggression to great effect and have no doubt that inspired those around him.

Tommy Moolick is one of the unsung heroes and has been for many a day now. He may not have the speed of a leopard but he has the heart of a lion.

There were others too.

Mark Donnellan made one vital stop; Mick O'Grady used all his instincts to ensure Derry did not get a third goal while you will not see a better goal for the rest of the summer than Daniel Flynn's brilliant effort in the opening half.

And what of Neil Flynn?

Coming on in the 46 minute the Maynooth man showed he can be a real handful, six points in total a real bonus; one can only wonder how things might have been so different if he had been available throughout the league campaign.

Hopefully Daniel Flynn can shake off the injury that forced him off in the second half and Paddy Brophy's finger injury, picked up in the warm-up, will be sufficiently healed to allow his availability.

After a horrible two weeks The Lilies live  on.

Following Monday morning's draw Kildare now travel to Pearse Park to take on Longford on Saturday June 23, with a 7 pm throw-in; the same day Kildare hurlers take on London in the final of the Christy Ring Cup in Croke Park, a game that throws-in at 2 pm