Time for Lilies to show some pride and passion, without either, we're at nothing travelling to Derry

It's all to play for in Owenbeg 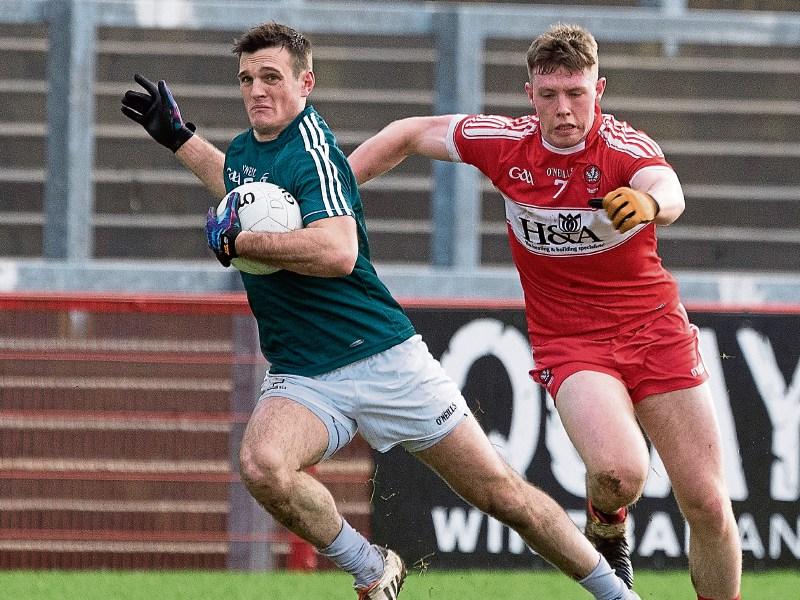 A trip to the Bogside, Derry Free Corner or  Owenbeg Centre of Excellence, was not part of the great plan for this coming weekend. In fact this weekend coming was meant to be a stepping stone to the Leinster  Senior Football Championship final. But such is life.

Who would have believed it? Derry.

My God we have some memories of travelling to The Oak Leaf County. Even to this very day when I hear of Ballinascreen, a shiver goes down my spine.

It was back in, possibly 2000, and if the memory serves me correct Eamonn Coleman was the manager of the boys in red and white.  A more hostile environment I don't think I have ever encountered and at this stage there isn't  a county ground I have not been to.

Johnny McDonald  got the line that day  (yes I know it wasn't the only time) but he was always a targeted player such was his talent. What we wouldn't do for a player of Johnny's class these days, I wonder to myself.

The spitefulness, the nastiness, the sheer hostility that particular day was something that will never be forgotten.

“F--- off back down south you Free State bastards” was shouted at us, amid being spat at and I can tell you that was the milder stuff. There was no hanging around for after match quotes, reaction, interviews  or anything like that, and that's for sure.

Of course a lot has changed in the intervening years.

A trip to Derry these days is far removed from the days British soldiers were lying on the side of the grass pointing an automatic weapon in your direction as the car was searched from top to bottom.

But back to Saturday and for those who are of the opinion that taking on Derry may not be as daunting these days as it was say five or six years ago when to get a win over them was something akin to getting a victory away to Dublin, Kerry or Mayo.

Yes Derry have fallen on bad times since the days Brolly was throwing kisses in Croke Park in the '90s.

Still they showed against Donegal last week they certainly can not be taken for granted, losing by a mere six points (2-16 to 0-16) against a side that included the great Michael Murphy, Paddy McBrearty and Hugh McFadden, to name us a couple.

However the fact that they (Derry) have the Slaughtneil players back on board, six lined out against Donegal, but importantly four for the first time in 2018, is a real bonus.

In many respects Derry  are not unlike Carlow, as they will certainly have no shortage of bodies behind the ball. Their main sweeper will, as usual be Mark Lynch but when they move forward, somewhat unlike Carlow, they will move at pace, especially their entire half forward line of Padraig Cassidy, Emmet Bradley and Patrick Coney while Enda Lynn in the corner is certainly no slouch either.

One thing they do have also is accurate free takers. Both Mark Lynch and Emmet Bradley will take frees and between them they fired over nine against Donegal, ironically the same amount of frees Paul Broderick scored for Carlow against Kildare.

So have no doubt, fouling these Derry boys will be very costly for Kildare and if they repeat their poor tackling again on Saturday then Kildare's involvement in the championship will be one very short one.

Moving the match to  Owenbeg is another plus from a Derry point of view. They have not lost a Qualifier at that venue and while they have only played four games there since 2013, nevertheless they have yet to taste defeat.

Derry are managed these days by Damian McErlain, who was in charge of the minors for the past few seasons, guiding them to an All Ireland semi final in 2016 and to the final last season, losing out to that all conquering Kerry team.

On the plus side from a Kildare point of view The Lilies have defeated Derry the last twice they have met in Qualifiers. In 2011 they won 0-19 to 0-13 while a year earlier Kildare gave them a bit of a trimming 2-17 to 1-9.

Kildare  lost by a point in the League to Derry in 2017, a late controversial goald deciding it.

If Kildare's confidence was somewhat suspect prior to the Carlow game, well one can only imagine what it is like after it. Without trawling over that game again, it is fair to say that The Lilies did not do themselves justice. They simply never got out of the traps.

Well no doubt a lot will depend on team selection.

Will Cian O'Neill and his selectors, Roli Sweeney and Enda Murphy, decide to give that starting XV one more chance or will they go down the line of wholesale changes?

Don't think it will be the latter.

Maybe two or three changes. Injuries, from what we can gather, is not a problem; none reported.

Maybe a start for James Murray or is that a bit much asking a player who would be making his debut in an away game against Derry?

Is Neil Flynn fit to start or will Eanna O'Connor be given another chance having been taken off (very harshly I felt) before half time against Carlow.

A lot of hard decisions  to be made between now and Saturday and that's for sure.

One way or another there is no doubt Kildare, and the entire management team, are under huge pressure.

The layers have once again installed Kildare as favourites at 8/11 and a spread of + or - one point at evens.

Kildare will be travelling more in hope that in expectation on this occasion.

No win since June last year is a terrible statistic but maybe, just maybe they can turn things around; a six point defeat by Donegal could be looked on by Derry as half decent, but we will have to wait, see, and hope.