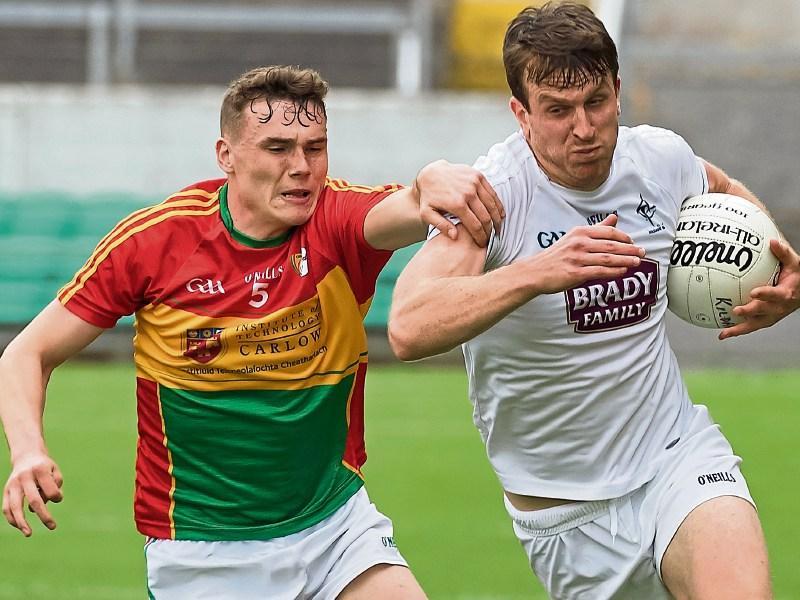 Before a ball was even kicked in anger on Sunday, Carlow held the upper hand. As the players made their way to their respective positions prior to throw-in Carlow players piled into one Kildare player after another with abandon, and with the exception of Kildare team captain, Eoin Doyle, the response from Kildare, was, well muted to the say the very least.

No doubt this was all pre-planned, but it had an effect. Carlow set the tone and set it big time.

That was to be expected, we were told after the game.

Well it may have been expected but the reaction, or lack of reaction from the players in white must have given the boys from Division 4 a major boost.

Here we were, a team from Division 1 (albeit relegated at this stage) playing a side that has come from the depths of the league; no hopers in the bookies eyes; no hopers  according to  most commentators yet they dictated the game before a ball was thrown in; they dictated after the ball was thrown in and did so from start to finish as Kildare played throughout like a side hoping and waiting for something to happen rather than grabbing the game by the scruff of the neck and making it happen.

Of course this is not the first time The Lilies have fallen to so called inferior opposition.

Remember Drogheda under Micko; remember Wicklow under The Geezer, and there were others down the year,  but somehow this seems even worse than anything we have all experienced.

This was, without a shadow of a doubt Kildare's worse display in 25 years, at least.

So what has gone wrong?

Granted the league proved a step too far but that was against the best teams in the country, the cream of the crop, yet early on at least, while not winning, not getting over the line, they were competitive but gradually the blood was sucked out of them; the belief was drained away; the competitiveness that we saw in the early on was nothing but a distant memory by the time the league came to its inevitable and worrying conclusion.

A mere 12 months ago Kildare were more than a match for Laois and Meath before putting up a respectable display against Dublin but were extremely disappointing against Kieran McGeeney's Armagh; proof positive indeed that Kildare, when the pressure is on; when expected to win, they just do not seem capable of getting over the line; they fold too easily and they fold too often.

Do we look at the management or more specifically the manager?

Do we look at the players?

Do we look at the tactics on the day?

Has, for instance, the manager lost the dressing room?

Has there been too much emphasis on technical side of the game; the videos; the blackboards the tactics and maybe not enough on the actual playing of the game?

Manager Cian O'Neill admitted after the game that he has to look at his own performance; his management's performance while also suggesting that the players must look at themselves also.

And there can be no doubt about that.

These players are well looked after; they get everything that they are entitled to, and a lot more besides, and so they should.

But one thing that should not be forgotten is that playing for your county is  an honour; to put a county jersey on is a privilege and when a lad is handed a white shirt he should leave no stone unturned on the field of play; come off that field knowing, regardless of whether winning or losing, that he gave it absolutely everything.

That unfortunately did not happen on Sunday; there are a few players going around with a swagger, a swagger that has no meaning; has not been earned and should have no place in this, or any Kildare set-up. The time for a swagger (if there is ever a time) is when a player has achieved something; being handed a county jersey is not an achievement in itself, it is a stepping stone to (hopefully) greater things; a road to something special, not something to stand back and admire and take for granted.

And now to compound matters what do we get after such a terrible display but a trip to Joe Brolly country, Owenbeg, on Saturday week, with a 3 pm throw-in. Playing it in Owenbeg suggests the mind games are already under way, at least up north.

And while Derry are not setting the lights out at present, their fall from Division 1 only a few short years ago to Division 4 come 2019 is nothing short of incredible, but having said that travelling to Derry and hoping to come away with a win, taking in what happened on Sunday is one hell of an ask.

On Sunday's display there won't be too many thinking The Lilies can get anything out of that game and that's for sure.

But that game just might be a blessing in disguise as it will give players, possibly a last chance in some cases, of showing what it really means to play for your county.

It is an opportunity that can either be grabbed by the scruff of the neck and attempt to try get the season back on track, or it can confirm what many already believe, that this is a dead team walking.

Regardless of what happens the weekend after next there has to be a major rethink of exactly where Kildare are.

There needs to be an in depth look at the structures; at the team management, and very importantly, at the make-up of the panel of players.

Having ability is one thing; having the hunger is quiet another; some hard decisions need to be taken and taken rapidly, both on and off the field of play.

Are those in charge of running the affairs of the county capable of making the right decisions for the right reasons?

There are many who think not, rightly or wrongly.

In fairness it is premature to be going down that line just yet but come two weeks time, or when ever Kildare make their inevitable exit from this season's championship, a major overhaul will be required that ensures Kildare's decline is halted and halted immediately.

On a day when there was little to cheer about, little to get too enthused about and little that would give anyone a lift, there was certainly one good news story. For some months one of the great Kildare followers, Ollie Doyle from Round Towers country, has been fighting illness and it was brilliant to see him in O'Connor Park, looking great and well on his way to a full recovery.  A ray of light in an otherwise dismal, dull and disappointing afternoon.